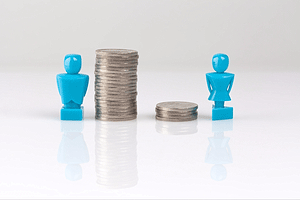 Divorce is an extremely difficult process. The choice to leave a marriage, especially when children are involved, can take an extreme emotional toll on both spouses, even when those spouses agree on the decision to pursue divorce. Unfortunately, one of the side of effects of divorce is known as “the divorce gap.” This gap refers to the gap in income and ability to meet basic needs that often appears between spouses during and after a divorce.

According to a recent article in The Atlantic, research from The London School of Economics shows that women who worked before, during, or after their marriages can see a 20% decline in income after their marriages end while men tend to see income rise more than 30% after divorce. Even more troubling are the numbers from this research that suggest the poverty rate for women who are separated is around 27%, nearly triple the figure for men in the same situation. This is an especially prevalent problem in circumstances where a woman has chosen to leave the workforce in order to stay home and raise a child or children during marriage. In those situations, women are likely to see their earning potential diminished when they reenter the workforce. A number of different factors contribute to the disparity in earnings between men and women after divorce, including the period of time during which the woman was not actively engaged in the traditional workforce.

Adding to the financial gap created after divorce is the cost of the divorce process itself. Many couples make the decision to pursue divorce believing they can do so amicably. However, the reality is that dividing common assets can be much more difficult than people anticipate. When it comes to figuring out intricacies that people do not always think of in relation to divorce, like tax consequences and dividing joint bank accounts, the amicable divorce process becomes much more adversarial and often requires the participation of family law attorneys with experience in handling the details of divorce. While couples that do decide to divorce on amicable terms upon which they can agree are likely to spend far less on legal fees, arriving at mutual decisions that take all aspects of the present and future situations of the spouses into considerations is often not an amicable process. Estimates of typical divorce litigation costs on average can range between $15,000 and $30,000, with some costs topping $50,000 according to the article. These extremely high fees often discourage spouses, especially men and women who have chosen to stay at home to raise children, from pursuing everything they may be entitled to in the divorce process. Ultimately, this ends up increasing the divorce gap because a disadvantaged spouse can end up owing thousands of dollars in legal fees while they are already struggling with an income divide that makes it difficult for them to acquire basic necessities.

The Divorce Gap and Men

The divorce gap can affect men and women alike. As parents’ perceived roles in society change, men can and do sometimes choose to stay home to raise children. In such circumstances, men that may be entitled to additional financial support from their former spouse often let their pride get the better of them and refuse to pursue or accept a monthly financial stipend. In these situations, men can sometimes face similar issues when reentering the workforce, especially in fields where base salaries are figured on the number of years of actual experience one has had in the field.

Solutions to the Problem

According to the article, many experts believe the only solution to the problem is to make divorce an administrative procedure and takes judges and the courtroom out of the equation. Supporters of programs and legislation that aim to do this believe that a courtroom is automatically adversarial, which increases the overall costs for each spouse. By removing what they believe is one of the biggest perpetuations of the traditionally adversarial divorce process when a judge and courtroom are involved, supporters of alternatives to traditional litigated divorce believe that they can reduce the financial, emotional, and mental strain that come with divorce.

There are a number of states that have adopted legislation that begins to take the judicial system out of the divorce process for couples that wish to pursue such options. New legislation in Florida helps make such alternatives, like the Collaborative Process, officially recognized methods for obtaining a finalized divorce. In this type of process, both spouses work together with a mediator and several other impartial experts who are able to focus on one portion of the divorce process that falls within their expertise.

For instance, in divorces where tax consequences and other financial matters are of extreme importance to both spouses, an unbiased financial analyst would work with the spouses to determine financial assets and subsequently allow the spouses to use that information as they see fit. There is also an option for either spouse to discontinue the process and pursue traditional divorce litigation if they find the process does not seem to be working.

These solutions do not come without their own detriments. In some cases, legislation that allows for alternatives to the traditional legal process is new or vague. In others, especially where parties work only with a mediator and submit a final agreement to a court, the agreements themselves can actually be too vague and will ultimately require litigation when circumstances between divorced spouses begin to change. For example, when spouses divorce and utilize a mediator to help them come to a settlement agreement, there is often no legal licensing requirement for such mediators. Thus, mediators can be unfamiliar with the specifics of divorce law in a particular jurisdiction. In these situations, what works for the time period during and immediately following a divorce may not work in five years.

If spouses have a young child during the divorce process, they may think they can predict the costs and needs associated with raising that child. However, those needs and costs are different as a child starts to grow up. Additionally, the financial situations of former spouses can change significantly depending on any number of outside circumstances. If, for instance, a mother with primary custody of a child is injured on the job or in a car accident, it may become difficult if not impossible for that mother to continue providing adequately for the child under the terms created by a mediated agreement. In these situations, using alternative processes can often just delay the inevitable need for attorneys and the judicial system as opposed to removing the need for those things as they were designed to do.

While the upfront and long-term financial costs often discourage people from pursuing the use of legal assistance in the divorce process, there are many different alternatives to the traditional role of a divorce attorney. Regardless of the process used, it is important to remember the important role an attorney plays in protecting your rights. Family law attorneys with experience in divorce can often highlight details that spouses and mediators may have missed. In an adversarial process, attorneys can help make sure that spouses do not get discouraged by intimidation or other tactics utilized by a spouse during the process. No matter the type of divorce you are interested in pursuing, seeking legal assistance and securing legal support for the process is a critical component to a fair divorce. If you have questions about the different types of divorce processes available in Florida or have already made the difficult decision to pursue divorce, contact Scott J. Stadler for a consultation about the circumstances of your case.