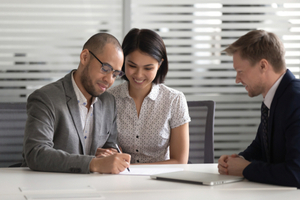 Millennials are more worried than ever about their future. The current economy has many people forgoing marriage entirely. Those who do want to get married want to make sure their assets are protected. Many millennials are hard workers with good jobs and they do not want to have to give up half of their assets in the event of a divorce.

That is where a prenuptial agreement comes in. This document outlines what will happen if the marriage fails. It allows the couple to agree on the terms of their divorce, rather than let a judge decide. These couples do not want to let state law dictate that they must split their assets fairly, which often means a 50/50 split. A couple may want to end their marriage on different terms. For example, one party may not want a certain asset split in a divorce. A prenuptial agreement can also determine whether or not there will be alimony in a divorce.

Even though fewer young people own houses nowadays, many have other assets they want to protect. Due to the economy, many millennials are interested in protecting their money. They worry about the financial implications of a divorce, especially if they are children of divorce. They may have seen their own parents struggle and do not want the same fate, whether or not they have children.

Also, millennials are interested in non-liquid assets, such as startup businesses and the stock market. In fact, nearly 70% of millennials have some sort of investments. These assets, however, are not concrete and due to this uncertainty, people want some sort of protection. A prenuptial agreement offers this.

Another thing to consider is that millennials are marrying later in life. While generations past would be married by their early 20s, many are waiting until their 30s to tie the knot. In 1962, 90% of 30-year-olds had been married. In 2018, that number dropped to just 54%.

This is because millennials are focusing on their careers. They want to be financially secure when they say “I do.” They want to experience life before settling down. This means that people are marrying with more money and assets, and a prenuptial agreement offers protection so their hard-earned money does not go to waste.

What exactly can a prenuptial agreement do? Such a document offers many protections. For example, if a person established a retirement account or received money for education before marriage, those assets would be protected. If either party has children from another marriage, their interests will be protected, as well. A prenup will also outline alimony obligations in the event of divorce.

Prenups can also outline beneficiaries in life insurance and disability policies. They can protect assets that a person expects to receive down the road, such as gifts and inheritances. They can address each person’s financial situation and determine liability for each person’s debts. For example, if you are the primary wage earner and pay the majority of the bills, you may not want to be liable for your spouse’s debts as well.

While prenups offer many protections, they cannot do everything. For example, they cannot be used to determine child support or child custody. Those matters will be decided by you and your spouse, or by a judge. Child support amounts are often determined by the state, while child custody is based on the best interests of the children. While you may think joint custody is the best course of action now, you may think differently after you have children and you find out your spouse has a drug addiction and neglects the children. You would likely want sole custody at that point.

A prenuptial agreement also cannot determine what happens with the marital home in a divorce. It also cannot define family matters, such as how often one spouse visits their parents or any other trivial issues.

Prenups Were Once Considered Taboo

In the past, prenuptial agreements were seen as unromantic and many even believed that they actually were more likely to lead to divorce. However, that is not true. While a prenup may make it seem like a person is expecting a divorce, the document is instead planning what will happen should the marriage end in divorce. It is just like signing a business contract. Marriage, in a sense, is pretty much a business deal.

Millennials are showing the world that prenuptial agreements no longer have to be seen as taboo. These legal documents are a smart idea for those who want financial protection in a situation such as a divorce, where things can get messy. A person can lose a lot of their assets in a divorce, and who wants to go through that?

A prenuptial agreement is a good idea for anyone with a significant amount of assets or anyone who expects to earn a great deal of money in the near future. A prenup can protect these assets so a person does not have to lose out on a lot in a divorce.

Even if you are already married, you could still benefit from a postnuptial agreement. Whether you are considering divorce or just want to protect yourself, Broward County divorce attorney Scott J. Stadler can help you understand your options. Schedule a consultation by calling (954) 346-6464.