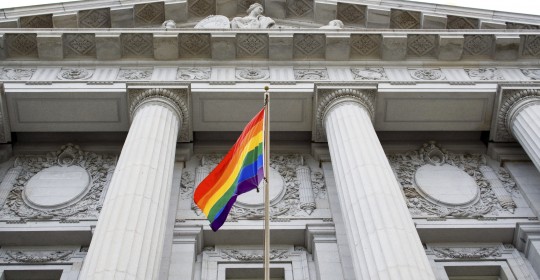 Florida banned same-sex marriage in 1977, and in 1997 the legislature added a prohibition to that law that prevented the state from recognizing those legally married in other states.   The 1977 law also prohibited adoption of children by gays or lesbians.   In 2008, voters approved a constitutional amendment which imposed a ban on same-sex marriages and civil unions.  There was even a provision to impose criminal sanctions on any court clerk that issued a marriage license to same-sex couples, including fines up to $1,000 and a prison sentence of up to one year.

In 2010 the law prohibiting adoption by gays or lesbians was declared unconstitutional by a Florida court, and upheld by the Florida Third District Court of Appeal.  Interestingly, the law is still part of the Florida Statutes.

Several court cases have arisen over the past few years challenging this ban on same-sex marriage, culminating in several important decisions in 2014.  There were several cases involving couples who had legally married elsewhere, but were now residing in Florida.  They wanted their marriages to be legally recognized for the purpose of dissolution.  Other cases wanted marriages performed legally elsewhere recognized for inheritance or benefit purposes.

2014 brought many cases on these issues to the Florida courts, some by private individuals, some by advocacy groups on behalf of same-sex couples.

On August 21, 2014, U.S. District Court Judge Robert Hinkle ruled in favor of the freedom to marry and respect for marriages legally performed between same-sex couples in other states or countries.  The case is now before the 11th Circuit on appeal.

The state of Florida sought extensions for the stays from the District Court judge and the 11th Circuit Court of Appeals, but both parties denied the request, and in December 2014, the United States Supreme Court also denied the request.  This led to the lifting of the stays, enabling couples to marry.

On January 16, 2015, the United States Supreme Court agreed to hear four new cases on the issue of same-sex marriage.  The Court is limiting the arguments and their ruling to two basic constitutional issues – the power of the states to ban same-sex marriages and to refuse to recognize legal marriages performed in other states.  These four cases come out of a decision by the United States Court of Appeals for the Sixth Circuit which upheld bans on same-sex marriage or marriage recognition in Kentucky, Michigan, Ohio and Tennessee.  This decision broke ranks with other Court of Appeals decisions from around the country, which mostly have declared such bans unconstitutional.

The arguments that the four states (who are trying to defend the bans) will put forth to the U.S. Supreme Court are (1) that the issue was decided in 1972 in a summary ruling in Baker v. Nelson and (2) that federal courts have no jurisdiction in domestic matters and thus the regulation of marriages must be left to the states.

The Baker case stated that a plea for a right to marry a same-sex partner did not raise “a substantial federal question.”  However, this summary decision merely upheld the Minnesota Supreme Court decision and was issued without written briefs and oral argument.    The decision contained no explanation other than that the constitutional claim of Baker and McConnell did not raise a “substantial federal question.”   It did not address the merits of the underlying case at all,   Depending on where you stood on the issue, this meant that (a) it was a foregone conclusion that same-sex marriage was not (and would never be) a constitutional issue OR (2) the court was free to revisit the issue if the precedent has been undermined by later “doctrinal developments.”   A lot has happened since 1972 in the evolution of equality for gays and lesbians.

Why Are The Bans Unconstitutional?

The constitutional arguments that support allowing marriage equality are based on the Due Process and Equal Protection clauses in the Fourteenth Amendment to the United States Constitution.

It reads, in pertinent part:

These two phrases have been used extensively to strike down laws that have been discriminatory to citizens of the United States, including laws based on race, gender, national origin and more recently, sexual orientation.   The basic argument is that by denying same-sex couples the right to marry, the states are abridging the privileges of the citizens and denying them equal protection of the laws.  In many courts, these arguments are working.

As many same-sex couples look forward to marrying and enjoying the benefits of legal spouses, there will be other issues that arise.  All the joys and happiness and trials and tribulations of opposite sex marriage are now available to same-sex couples.

Prenuptial, or antenuptial, agreements may desirable between the spouses, because many long time partners have by necessity accrued assets separately.   While no one really goes into a marriage contemplating they will eventually be divorced, the reality is sometimes that it is necessary to protect yourself – and the assets you have worked long and hard for- from the mandatory marital division of assets that come with divorce.

Child support and custody issues will also arise in the context of same-sex marriages and divorces, and one must be prepared for those scenarios.  Prior to this ruling on marriage, because same-sex couples were not recognized as such, only one person could legally adopt a child or children, or be named as the birth parent.  While not specifically addressed in any decisions, it seems now that the couple could both adopt the children or have both names on a birth certificate.

There are benefits now available to same-sex couples which were not prior to the lifting of the ban on marriage.  Being recognized as a spouse conveys certain rights such as inheritance and beneficiary rights in pensions. There are more than 1,000 federal legal benefits including Social Security (if living in a state where the marriage is valid), taxes, federal loans, survivor benefits, healthcare, health insurance, health emergency decision making, child custody, property rights, retirement benefits, and more.  (We will discuss these at length in another article)

If you have questions about your rights, obligations or duties as part of a same-sex couple, you should seek an experienced family law attorney.  They will be able to guide you on this new path, as the laws they have worked with for years will now apply to your circumstances.