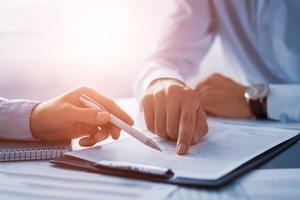 If you grew up in the ‘90s, you may have watched the sitcom “Full House” and remember the adorable Michelle Tanner, played by twins Mary-Kate and Ashley Olsen. Those twins are all grown up, and one of them—Mary-Kate—is actually going through a nasty divorce right now. Mary-Kate, 33, is currently in the process of divorcing Olivier Sarkozy, 50, her husband of five years. Of course, like other couples who want to end their marriage during a pandemic, divorces are complicated right now, and Mary-Kate’s is no exception.

Mary-Kate has requested an emergency order for her divorce. Sarkozy gave her until May 18 to get her things out of the apartment they share, but she claims that is not enough time and has requested that she have until May 30 to pick up her belongings. However, her request was denied because the judge decided that her divorce was not an emergency. Emergency situations often involve money, children, or domestic violence. None of these situations applied in Mary-Kate’s case.

Her main concern was that her husband was trying to deprive her of their marital home, an apartment in the Gramercy Park area of New York. Apparently he terminated the lease on the apartment without her consent. Mary-Kate also stated in a letter that she was worried that Sarkozy would also try to sell or dispose of her personal belongings as well as marital assets.

A New York judge, however, did not find these issues pressing. Due to the coronavirus, New York courts are only hearing divorce cases that are deemed true emergencies. Mary-Kate’s divorce did not rise to the level of an emergency. This means that despite being in the middle of a pandemic, Mary-Kate must move out of the apartment and find a new place to live ASAP. This may seem unfair to her, but that is the law.

If Mary-Kate truly had nowhere else to live, then a judge might have considered that a true emergency. But given that Mary-Kate is estimated to be worth $250 million, she can easily buy or rent a place to live virtually anywhere. Finding a place to live should not be difficult for her.

So, while Mary-Kate will not be able to move forward with her divorce at the moment, the good news is that she has a prenuptial agreement in place. It will more than likely be enforced once the courts reopen.

What is Considered an Emergency Situation?

A divorce may take six months, one year, or even longer to finalize. To speed this up, a party can request an emergency divorce. While normal divorces are not being granted at the moment because of the coronavirus, judges will grant emergency orders if the situation is urgent.

What is considered urgent? There is a high bar that needs to be reached. Of course, most situations will not qualify as emergencies, even though the parties may try to make their situation sound urgent so they can move forward.

Matters involving children may be considered urgent, especially if there is concern about the children’s safety. Courts are often quick to grant emergency custody orders if there is evidence that a child’s life may be in danger by staying in the custody of one or both parents. Visitation issues may also spur emergency orders. Example would be failure to return a child to the other parent after visitation or taking a child out of state without permission from the other parent.

Financial matters may also be considered urgent. While child support and alimony may not require emergency orders, you may need one if your spouse suddenly stops paying the bills. How will you eat? How will you pay for rent/mortgage, utilities and other expenses? These are things that need to be paid now. You cannot wait weeks or months, so you can request an emergency order in this situation. This will force the other spouse to continue paying these expenses until you can schedule a court hearing and work things out at a later date.

If your spouse starts taking money out of accounts or selling your assets at the beginning of a divorce, you can request an emergency order. This would force your spouse to replace the funds or give you the money he or she received from selling your possessions. These assets are part of the marital estate to be divided later, so you are entitled to your fair share. As the innocent spouse, make sure you get reimbursed for your spouse’s behavior.

Domestic violence is something that is also taken seriously, since many people are injured or even killed by such abuse. If you or your child has been physically harmed by the other spouse, you will be able to get a restraining order, but an urgent one called an emergency protective order. However, the process can be tricky. You will need a solid working knowledge of the court rules and regulations, so seek assistance from a family law attorney as soon as possible.

Most couples divorce through the regular process, but there are situations in which an emergency order may be needed. Usually these issues involve children or money, but if you think a situation may be urgent, seek legal help.

Broward County divorce attorney Scott J. Stadler can address your concerns and determine if an emergency order is necessary. Let him and his team guide you through the process. To schedule a consultation, call (954) 346-6464.