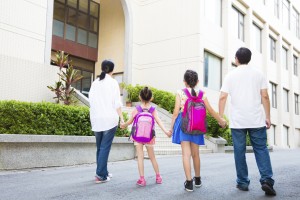 In many cases, the effects of a divorce can reach much further than just the parties to the case, including any minor children involved in the case. Life, however, does not stop just because an individual has obtained a divorce, and it is likely that an individual might remarry after a divorce. While there can be some initial awkwardness between stepparents and biological parents, it is not impossible for a solid relationship to develop. In fact, facilitating a strong relationship between a stepparent and biological parent will not only make things more comfortable for both sides of the divorce, but will also provide the child with a more stable relationship with both parties. Below are some ways step-parents can develop or maintain a successful relationship with the child’s other parent.

While communication is a big step when it comes to stepparent relationships with the other parent, it will only take you so far. In order to ensure that the child spends enough time with both families, it is also important to make sure that both the parent and stepparent coordinate their efforts to be there for the child. Coordinating schedules and appointments can go a long way to facilitate a relationship between both the stepparent and the other parent. Events that can be coordinated or scheduled include medical appointments, school visits, and vacations. While it might initially feel awkward to show up to a parent-teacher meeting with the other parent, the child will benefit from the support of both families.

Respect, however, can go much farther than words. In most cases, your actions will speak louder than words, and children will generally take more notice of your actions than what you say. It is important to always be a good role model for the children. In addition, it is just as important to respect any boundaries that the other family may have established.

One of the most important things a parent can do for a child is to love him or her. It is important to not get caught up in challenging the other parent’s love, or in trying to one-up the other parent in expressions of affection. While some people might think that buying a child’s affection is an acceptable way to be a ‘better parent,’ a child needs a parent more than ever after a divorce. Love is more than a contest, and when two parents try to outdo one another, everyone loses.

Do not Neglect the Other Parent

It is important to remember that, even if the other parent does not have physical custody over the child, he is still the child’s parent. Encouraging your child to recognize the importance of the other parent can help them adjust to any changes. Even little things like remembering the other parent’s birthday or celebrating holidays can help facilitate a successful relationship.