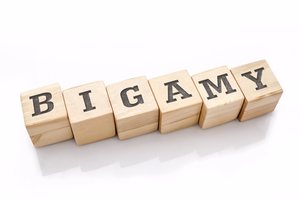 For most people, one marriage at a time is enough. However, some people are married to multiple people and have more than one spouse at a time. Marriage to two or more people at one time is called bigamy, and it is illegal in Florida and all 50 states. Some countries do allow bigamy, but not the U.S.

Many people are understandably upset when they find out their spouse is cheating. They will likely be much more upset to find out that they are sharing their spouse with another man or woman.

So, what happens next? Do you continue to live in the marriage? Do you file for divorce? Can you even get a divorce if there is a possibility that your marriage is null and void? If your marriage is bigamous, find out what steps to take to remedy the situation.

How is Bigamy Different from Polygamy?

Bigamy and polygamy are often used interchangeably, but they are not the same thing. Bigamy occurs when one person marries a person without legally ending the previous marriage. Bigamy is often kept secret; the spouses do not know about each other or voluntarily enter the marriage.

Polygamy also involves multiple spouses. However, the polygamy is not a secret. Everyone involved knows about it and the spouses voluntarily live together.

What the Law Says

Under Florida Statute 826.01, bigamy occurs when a person has one or more husbands or wives at the same time. It is a third-degree felony, punishable by a $5,000 fine and up to five years in prison. In some states, the other spouse could also be charged with a crime if they married a person knowing that they were already married. The punishment ranges widely. In some states, the penalties range from six months to 10 years in jail. Fines may range from $500 to $100,000.

Bigamy is hardly ever done on purpose. It is often accidental, such as when a divorce was actually not finalized because of a technicality. There have also been situations in which a prior spouse is actually alive after being presumed dead. In the United States, if a person does not hear from his or her spouse in five to seven years, remarriage is not considered bigamous under the law.

Under Florida law, a marriage in which one spouse is already married is considered void. While there is no effect on the first marriage, the second marriage is illegal. In this case, to end the second marriage, a spouse must file an annulment instead of a divorce. This is because divorces are reserved for valid marriages, and bigamous marriages are not valid.

An annulment is different from divorce in several ways. It is a decree that states that the marriage is illegal and therefore null and void. It makes it so the marriage never took place. This means that no alimony is available. Unlike divorces, assets and debts are not distributed equally.

If children were born during the marriage, they may be deemed illegitimate. A paternity test would be required to confirm whether or not the husband is in fact the father of the children. This is because a child born in a void marriage cannot be presumed to be the children of the husband.

Once paternity is established, the court will determine various elements such as child support, and child custody. The judge may be tasked with creating a parenting plan and timesharing schedule.

While bigamy is a felony crime, it is rarely prosecuted. An exception would be if the marriage was entered into in order to commit fraud or some other felony.

In fact, a Florida man who had two wives was not charged with bigamy because one marriage took place in Las Vegas. Under the law, the marriages would all have to take place in Florida in order for a person to be convicted of bigamy. Given this loophole, a Florida resident could have multiple marriages and not be arrested. They would simply have to ensure the marriages took place in different states. Florida lawmakers can prevent this from happening by revising the wording of the law.

While bigamy is illegal in all 50 states, it is rarely punished. To prevent bigamy for occurring, those who have been married before should order a copy of their divorce decree to make sure that they are in fact divorced. This can prevent embarrassment in the future.

If you reasonably believed that your marriage had legally ended due to divorce, annulment, or death, but a technicality or some error caused you to still be married, then the state will likely excuse the situation and not charge you with bigamy. You would have to prove that you had no contact with your spouse for a significant period of time—five years or longer. At this point, it is reasonable to believe that your spouse had died.

If your spouse has multiple spouses, he or she could face criminal charges. On top of that, such a situation can ruin a marriage, as not many people want to share their husband or wife with others. Your marriage could be fraudulent, so you need legal advice. Is an annulment or divorce more appropriate?

If you have discovered bigamy in your marriage, it may be time for an annulment or divorce. Seek legal advice from Palm Beach divorce attorney Scott J. Stadler. He can help you understand your options and next steps. To schedule a consultation, call his office at (954) 346-6464.