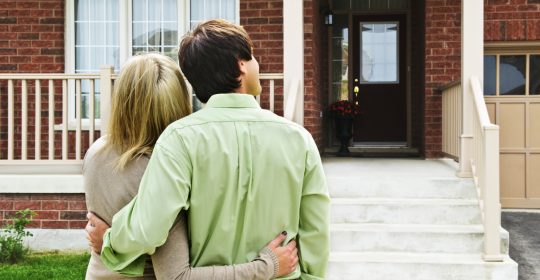 Most people are familiar with the concept of property division in divorce. Once the judge has made a ruling, both parties will generally get a division of the marital property, which includes the marital home. In most cases, one party gains the marital home through the divorce, while the other must find a new place to live.

However, divorce can be a messy procedure, and there are times where it might not be feasible for both spouses to live in the marital home while the hearing is proceeding. Whatever the reason for getting divorced, things may only become more stressful between former partners if forced to cohabitate. In addition, cohabitation could make things harder for any children involved. (How cohabitation affects alimony payments)

As with other situations in divorce, the simplest answer is to agree on such matters before the divorce has even been filed. If you made the agreement beforehand through pre-nuptials, or through a separation agreement, then the answer can be very easy, since the court will generally uphold whatever is stipulated in the agreement. This is usually the simplest method of determining who gets the marital home during the divorce, but often times reality can complicate things in various ways.

It is important to keep in mind that your chances of getting the marital home after the divorce will not be diminished should you choose to willingly vacate the marital home before the divorce is finalized.  In absence of a separation agreement, or any other kind of agreement to provide one party with the marital home, the court may have to take action depending on the situation.

As with most matters in family law, Florida has set provisions in place that help determine not only what happens after a divorce but what happens during a divorce. For example, while there are not any specific laws that establish whether one party has more right to live in the marital home than the other spouse, there are actions a person can take in court in order to gain rights to the marital home. Even though both parties start off with equal footing when the divorce is filed, it is possible for one party to gain rights to the marital home while the divorce is in court.

Filing a motion in court is one of many ways a party can be heard before trial. A well-timed motion can even prevent a party from taking certain actions, depending on the needs of the case. As with in any case, it is possible for a party to a divorce to file a motion in order to gain injunctive relief, which includes sole access to the marital home. There are, however, a few rules that need to be followed before a judge will consider such a motion. For example, in order to consider a motion, that motion must be served upon the opposing party as well as the judge. In addition, a motion generally cannot be made immediately after the complaint is filed, since the court must allow the respondent time, generally 20 days after the complaint is filed, to file an answer before the case can proceed.

In order to gain rights to the marital home during the divorce in Florida, a party must first file a motion for temporary support. Once the petition is filed, both parties will have an opportunity to argue their position on that particular issue. Through temporary support, it is possible for a spouse to obtain an injunction preventing the opposing spouse from living in the marital home for the duration of the divorce proceedings. This can be especially helpful if the relationship between spouses is volatile, and the spouse petitioning to live in the marital home is at risk of domestic violence in some way. In such situations, however, it might also be beneficial for a party to fill out a petition for injunction for protection against domestic violence.

As with other domestic matters, the presence of a child can radically alter the outcome of a case. Not only do the courts provide separate forms for spouses with and without children, but the presence of a child creates a whole new consideration in the matter. A parent that keeps custody over the child during the divorce might have a better chance of being granted the temporary rights to the marital home, as long as it is in the best interests of the child to do so.

Understandably, each case has its own facts and considerations. While gaining temporary rights to the marital home might be best in one situation, it might not be as good of an option in another. Because family law can be a stressful area of law, it is important to work with an experienced attorney if possible.