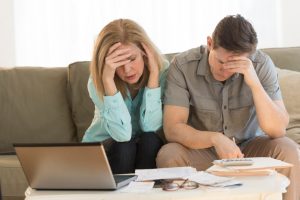 In most divorces, there are a multitude of factors to consider. An individual might be faced with issues ranging from how to divide property to figuring out how much time each parent gets to spend with any children of the spouses. Sometimes, however, there are circumstances that can have a drastic effect on divorce proceedings, such as bankruptcy. While the bankruptcy can be an event that might only affect one party to a divorce, there is no doubt that it can drastically affect the outcome of divorce proceedings.

There are two ways to divide up property. The first way is through a separation agreement such as a prenuptial or postnuptial agreement. Within these agreements, parties are allowed to divide property as they wish, as long as both parties agree to the division. The next method, which is the most widely recognized entity regulating property division, takes place under the jurisdiction of the court. While the court will consider different factors in dividing up property, the division will generally be much more rigid than it would have been if the property were divided in a separation agreement. In Florida, while the main goal is to provide an equitable distribution of property to each spouse, under Florida Statute 61.075, it is presumed that an equal split of property will be fair for both parties. While this is the general aim of the court in property division matters, there are situations in which an unequal division may be justified.

In such cases, the court will consider a number of justifications, including, but not limited to:

Once a court is able to equitably divide the property, the next concern of the court is then what property may be divided between the spouses. While people may think that any property owned by either spouse is fair game for division in a marriage, such is not often the case.

In most jurisdictions, property owned by either party in a divorce will be divided into one of two categories. The first category is marital property, which can consist of property that is obtained or incurred during and in furtherance of a marriage. Generally, a broad range of property will be included in this definition, including:

The next category of property in a divorce is that of non-marital property. While this can seem like a fairly straightforward term, at times, it can be complex. Generally, non-marital property will consist of any property obtained either before the marriage or after the divorce was filed. That being said, there are a number of additional ways for property to be considered non-marital in nature, including:

While Bankruptcy is an event that can affect a person’s debts and responsibilities within a marriage or divorce, it is federal bankruptcy law, not state family law, that dictates how bankruptcy will affect debts and obligations. Bankruptcy law has made some adaptations over the years in order to address the situation of debtors who divorce and the effect of bankruptcy on divorce. Generally, when a party files for bankruptcy, most assets will be sold and most debts will be canceled if they are unable to be paid. While there are several types of bankruptcy, with different effects on what will and will not be exempt from the bankruptcy proceedings, the legislature has developed protections for certain entities.

Under 11 U.S.C. Section 523, there are several types of debt that will not be discharged by filing for bankruptcy. One such debt includes any debt for a domestic support obligation. In addition, debts to a spouse, former spouse, or child of the debtor that is incurred by the debtor in the course of a divorce or separation will not be discharged after a party files for bankruptcy. This means that a party cannot evade providing a spouse with their due portion of the marital property if he or she tries to file for bankruptcy during or after divorce proceedings. In addition, parties may not evade established child or spousal support arrangements if they file for bankruptcy after the divorce has been finalized.

While a party may not be able to evade payments made under a divorce proceeding, bankruptcy can still have a drastic effect on a party’s ability to pay debts that are owed. In addition, if a party files for bankruptcy before a divorce, then the remaining property will be all that is left to divide. To complicate matters further, if the debt leading to bankruptcy was incurred on a joint account, creditors may have the option of going after either spouse in order to collect the money.

Even though bankruptcy can affect asset division in a divorce, a spouse may protect himself by providing a clause within a separation agreement that limits the impact of bankruptcy on the divorce. In any divorce case, it is always best to consult with an attorney to discover any and all options available to a party.