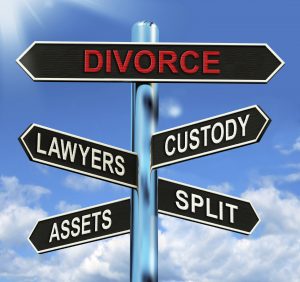 As most people are aware, divorce can be a messy and complex process. From dividing property to deciding custody matters, divorce affects every aspect of a person’s life. However, even though every divorce has its own quirks and considerations, every divorce must follow the same general process.

Just as with any other lawsuit, a person must first file a petition with the court in order to begin the proceedings. In Florida, an individual must file a “petition for dissolution of marriage” form with the appropriate court. This petition allows the person filing the petition (petitioner) to bring forth any matter he or she may want the court to address, including property division, spousal support, child support, and child custody. Interestingly enough, because child custody matters are regulated by separate rules, a petitioner with minor children from the marriage must also file a completed Uniform Child Custody, Jurisdiction and Enforcement Act (UCCJEA) affidavit, stating that Florida has jurisdiction over the minor child.

-any spousal or child support orders a party is already directed to pay.

While the divorce process does have a huge effect on a person’s life, the needs and responsibilities of the parties continue. In some cases, parties may have needs that must be met before the court can even make a decision. In these situations, a party may request a temporary emergency court order. Through a temporary order, parties can address such issues as restraints on who controls and has access to property, who has custody over the children during proceedings, and whether a party can visit the opposing party.

Just as with any other case, obtaining evidence is a crucial part of establishing, or defending against a claim. The discovery process takes place before the trial actually begins, and allows parties to not only gather facts about the case, but to also estimate the opposing party’s position. There are several tools that can be employed during the discovery process, some of which include depositions, interrogatories, and document requests.

While each party will have the opportunity to obtain witness statements during the trial, depositions allow parties to obtain out-of-court witness statements made under oath. During the typical deposition, several parties will be present, including the party filing for a deposition, the witness, a court stenographer, and opposing counsel. While parties can obtain a wealth of information from depositions, a party can also build up a great deal of fees or costs through the deposition process.

Each party will generally have their own set of financial and medical documents that could have some bearing on the case. Fortunately, parties are allowed to request specific documents from opposing parties in order to better support their own case. While there are documents that can be protected under certain privileges, the majority of documents, such as bank records or tax papers, will be discoverable through the court.

While it is the court’s final decision that makes a divorce official, parties are always free to agree on their own regarding the specifics of the divorce. While an out of court agreement may not be the most feasible solution in some situations, it does carry the advantage of allowing parties to work together during the divorce. While the court does consider such matters as the value of property or the income of the parties when dividing marital property, it will not consider other aspects of property, such as sentimental value. For example, while many people may consider a pet, such as a dog or cat, to be part of the family, in the eyes of the court, the pet is just another piece of property to be divided.

Generally, before the trial begins, courts will require that the parties meet with a mediator in order to attempt to settle the case out of court. If a settlement cannot be reached by the end of this period, however, then the trial will begin.

During a trial, parties are allowed to present their own side of the matter, and may present their evidence and put forward their witnesses in order to support a case. Once a divorce case has reached this point, then it is up to the judge to rule on the petition, which includes considerations such as, how to divide property, how to decide which parent a child stays with, and whether a party will have to make support payments.