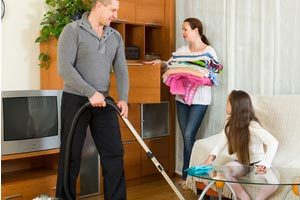 There are many reasons why people choose to get a divorce. Ultimately, the choice to divorce is deeply personal and the circumstances that lead to divorce are unique to every situation. However, there are some common reasons that people get divorced. Some of them are obvious, like money. Fighting over finances is one of the biggest reasons people get divorced. However, a recent study shows that household chores can play a role in determining whether or not a marriage is successful. A study conducted by Pew Research Center indicates that a majority of adults believe that sharing chores is an important part of a good marriage.

Looking at the Numbers

The survey indicated that more than half of married adults in the United States believe that sharing chores is “very important” to a good marriage. This included responses from married couples with and without children. While sharing household chores ranked below a healthy sex life and shared interests between spouses, it still seems to have a significant impact on a marriage.

Distribution of Chores Could Matter

A separate study from the same research organization showed that about half of married or cohabitating adults with at least one child under the age of 18 in the home said that they more or less split chores evenly. 41% of those respondents indicated that the mother does more chores while 8% indicated that the father did more. These numbers could be slightly misleading because they do not necessarily consider factors such as how many hours each individual spouse works or even things like commute times, both of which could impact the distribution of chores at home. However, the study did indicate that when both adults in the home were working full time, chores were more likely to be split evenly.

The studies also seemed to indicate that income could play a role in the division of chores at home. According to respondents, marriages in which both spouses earn the same or about the same were more likely to say that chores were divided equally with 65% responding as such. With couples where one spouse earns more than the other, only a little over 50% of respondents said that chores were split evenly.

The studies also seemed to indicate a discrepancy between genders in how chores are viewed. Fathers were more likely to indicate that the household chores were split evenly between both spouses with 56% of respondents indicating this compared to only 46% of female respondents indicating the same belief. Half of mothers surveyed indicated that they were likely to undertake more household responsibilities compared to only 12% of fathers indicating that they do more around the home.

The study does not necessarily connect chores directly to divorce. However, looking at additional research can help establish a connection. Psychology Today says a study conducted with 2,000 heterosexual couples found that 70% of divorces were initiated by women. The study found that married women were less likely to indicate that they were satisfied with the quality of their marriage than married men. If these numbers reflect a common trend where women are more likely to initiate divorce, then chores may play a bigger role in the decision to get divorced than one might think.

It appears as though the United States is not alone in this outlook. In fact, Express says a similar study conducted in the United Kingdom demonstrated roughly the same thing. That study found that 30% of marriages that ended in divorce ended because of an unfair division of household chores. It showed that, on average, most couples that divorced because of an unfair division of household chores did so after fighting about chores three times a month for nine months. 17% of respondents that divorced over chores fought with their partners about household work for two years.

While it may be unrealistic to pin a divorce solely on who did what chores, chores could be indicative of a larger issue in a marriage. One thing that these studies undoubtedly demonstrate is that marriage is about compromise and working together. When one person starts to shoulder an unfair burden, it eventually starts eroding the relationship. Communication plays an important role in having a fulfilling marriage, and recognizing issues that could be present beyond who does the dishes most nights can be an important first step in recognizing a problem and addressing it before it leads to divorce.

Legal Assistance with Your Florida Divorce

If you are considering a Florida divorce, no matter the reason, it is important to work with an experienced Florida divorce attorney that focuses their practice on working with clients experiencing a divorce. Doing so can help you protect your rights and help ensure that you can navigate the divorce process in as successful a manner as possible. Contact Scott J. Stadler to schedule a consultation about your Florida divorce questions and find out what options might be available to you in your circumstances.