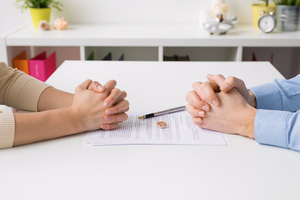 One of the most talked-about divorce statistics is the fact that 50% of marriages end in divorce. But is this statistic actually true?

In reality, over any given year, fewer than 5% of marriages end in divorce. Add this up, and over time, the actual percentage of divorces is between 40 and 50%.

Ethnicity, age and money are also factors in a divorce, believe it or not. Read on to learn some surprising statistics and trends regarding the divorce rate in the United States.

While it may seem as though divorces are on the rise, the opposite is actually true. After spiking in the 1970s, divorces have been declining since 1981. At the same time, the number of marriages has also been dropping, so it makes sense.

There are several factors that make a woman less likely to divorce. A woman who is religious, college educated, married after age 25, with a baby after marriage and earning an income of $50,000 or more is up to 30% less likely to file for divorce than a woman with none of those factors. However, some statistics show that religion does not have much of an effect on divorce after all. The divorce rate for Christians is 25%, which is pretty much the same as non-religious adults.

Age should also be taken into consideration when discussing divorce statistics. Millennials are actually less likely to divorce than older couples. Gray divorce has been on the rise in the past several years, with couples over the age of 50 ending their marriages at record rates.

Even location can have an effect on divorce. Those who live on the West Coast are more likely to divorce than those who live in the central or eastern United States. However, Arkansas has the highest divorce rate, at 23.4 per 1,000 married people. This makes sense, considering that the marriage rate in the state is also the fifth highest in the nation.

There are many reasons why couples hold off on divorce despite being unhappily married. One major reason is the sheer cost of divorce. While it is possible to get divorced for just a few thousand dollars, it is rare. When children and high numbers of assets are involved, there is likely to be some contention among the couple. A contested divorce is not cheap to fight. The average contested divorce costs anywhere from $53,000 to $188,000.

If you are a young adult who has never been married, you may want to wait a few years. Marrying after age 25 reduces the risk of divorce. To reduce your risk of divorce the most, wait until your mid-30s to tie the knot. The divorce rate is lowest among those who marry between the ages of 35 and 39. At that age, the rate is just 5.1% for women and 6.5% for men.

When deciding to remarry, women are actually the ones to jump into a second marriage more quickly. It takes them, on average, three years vs. three and a half years for men.

If these statistics have scared you away from marriage, do not let them. While there are societal pressures to get married and have children by a certain age, keep in mind that approximately 25% of the adult population has never been married. Many couples nowadays are choosing to live together without saying “I do,” so that is certainly an option. A successful and happy marriage takes a lot of hard work and is not the right choice for everyone.

If you are considering ending your marriage, knowing the facts about divorce can make the process easier. Hopefully these statistics and trends can help you determine if divorce—or even getting married altogether—is the right choice for you.

If you are considering divorce, having the right legal help on your side can make all the difference. Palm Beach divorce attorney Scott J. Stadler can protect your legal rights and help you make the right decisions during this stressful time. Schedule a consultation today by calling (954) 346-6464.