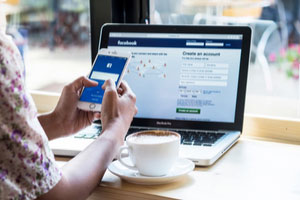 Social media has been known for breaking up marriages. It has also been known for negatively impacting divorces. Millions of American use Facebook, Twitter and Instagram on a daily basis. Most post freely, not realizing the impact that each post has on their personal life. Many people post frequently about everything and this can come back to haunt them, especially in a divorce case.

Lawyers will often dig up dirt to use against the other party in a divorce case. They will use whatever evidence they can find to show that the other person is an unfit parent or bad wife or husband. They might try to find evidence of the person partying, doing drugs, cheating, spending money they claim they did not have, or talking negatively about their spouse.

Nowadays, lawyers do not have to go too far. They can find a wealth of information simply by perusing a person’s social media accounts. Facebook posts and Twitter tweets can provide fodder for a divorce case. Even text messages and emails can be used to prove that a person did something they were not supposed to do.

So, how can you prepare yourself for an impending divorce? Read on to see how social media can affect your divorce and what steps you need to take to protect your online information.

How Social Media Can Impact Your Divorce

Social media use can help uncover lies that a party may have told the other spouse or their lawyer. For example, many people try to hide information about their finances. They do not want to split the hidden bank account in a divorce. They do not want to pay alimony or child support.

To avoid paying up, a person may try to claim that they have no job or that they have no money. However, a look at their Facebook profile may show them bragging about their recent raise or promotion. Perhaps they have photos of the new sports car they bought with the money they supposedly did not have. Maybe there are photos of a recent vacation. Even LinkedIn can be used to see what jobs a person has. In some cases, lawyers find that clients’ spouses have side businesses that they never knew existed.

If a person is claiming to not have money, social media needs to reflect this. Posting photos showing the exact opposite is a good way to be seen as dishonest. A person can be penalized for such behavior and be forced to give up more assets or pay more in alimony.

Some good advice: If you do not want a judge to see it, do not write it anywhere. Many people think that if their Facebook profile is set to private, only their friends can see it. The truth is that anyone can access anything online.

Lawyers will also look at dating sites to see if a client’s spouse is there. A profile on a dating site before the divorce is finalized almost always indicates cheating. Plus, those on dating sites often represent themselves in a more favorable light, which means there could be evidence of dishonesty.

Social media use can also affect child custody cases. Sometimes people post photos of themselves in unfavorable situations. Pictures of a mother partying and drinking will be looked at negatively, especially if the kids were left at home or with the father while the partying occurred. The woman could be seen as an unfit mother and she could lose custody of the kids.

Social Media Use During a Divorce

So, how can you avoid these negative effects of social media use during your divorce? During a divorce proceeding, you can be sure your spouse will be looking at your social media. Therefore, the simplest way to avoid any negative effects is to stop using social media altogether. Avoid posting anything at all on Facebook, Twitter, or any other sites you use. Any text or photos you post can be used against you in court.

You should definitely avoid posting anything about your divorce. Your Facebook friends do not need to know all the details. If you must confide in someone, see a therapist or make arrangements to meet with a trusted friend in person.

You should not even vent about your spouse online. Badmouthing, name-calling, or posting anything negative about your spouse will work against you. You will be seen as vindictive, which will not help your divorce case.

Take a look at your friends list on social media. Keep in mind that some of these so-called “friends” may actually be on your spouse’s side. Take the time to remove any of your spouse’s friends and family members. You do not want to take the risk of any of your friends spying on you and reporting back to your husband or wife.

While the best thing to do during a divorce is to stop posting on social media, you definitely do not want to go as far as deleting your accounts altogether. This is called destruction of evidence and can lead to legal issues.

Once you post something online, it is there forever. It can not be thrown away or erased. Investigators can easily view your social media posts and find dirt to use on you in your divorce case.