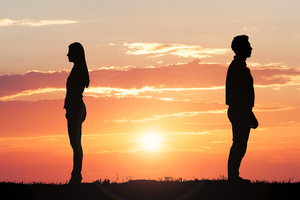 If you are tired of trying to make your marriage work, and therapy has not helped, your first thought may be to consider divorce. However, many people choose separation instead. A separation does not fully dissolve the marriage. You are still technically married, so you cannot date other people and legally remarry. So, why would couples choose this option?

It is mostly a matter of personal preference. Some couples prefer to separate because they believe that divorce is taboo and they do not want to deal with the stigma of being divorce. In some religious and cultures, divorce is not allowed, so couples who are having marital issues will decide to separate instead.

Many couples decide to separate because it sounds better than a divorce, especially if there are children involved. A divorce can sound devastating to a young child who wants to have a relationship with both of their parents. Plus, sometimes the spouses still love each other, but just cannot live together. They can continue their marriage with a separation.

Another thing to consider is that a separation is reversible. If you decide you want to stay married, you can easily do so. With a divorce, though, you do not get that option. A divorce is a permanent decision. You cannot change your mind at a later date once it has been finalized.

For many, a separation is the first step in a divorce. A couple may decide to handle financial and child custody issues while they are separated. Then, if they decide to divorce, it makes that step much easier. If they decide they want to stay together, they can do so.

Separation has financial benefits as well. When you divorce, you are no longer married to each other, so you cannot inherit from each other. You cannot use your spouse’s health benefits and vice versa. However, you can if you decide to separate instead. You will retain the benefits you had when you were married. This means you are entitled to your spouse’s Social Security benefits and retirement plans as well. There are also tax benefits from filing as a married couple.

In a legal separation, though, the process is the same as a divorce. You will divide your assets and debts. You will live separately. If you have children, custody and support will be involved. The main difference is that in a separation, you are not divorced. You and your spouse are still considered legally married to each other.

If you and your spouse decide you want to live apart, you can just simply do so. This is called a trial separation. You do not need to get the court involved. You do not need to fill out or file any documents. However, keep in mind that if you decide to file for divorce later on, you will need to be a Florida resident for six months prior to the filing. Therefore, you should not decide to move out of state.

In Florida, if you want to separate, it just means that you and your spouse will live in different residences. Each person will pay the expenses of each household. You will have separate bank accounts. If you have children, then you and your spouse will determine the custody schedule. One parent may have sole custody or the parents may split in 50/50 or in some other way.

In terms of child support, you can request child support from the other parent whether or not you are filing for divorce. Under Florida law, both parents are obligated to provide financial support to their children if they have the means to do so.

In terms of alimony, you can still ask for it in the absence of a divorce, under Florida law. However, obtaining it is difficult. While Florida has lenient alimony laws, courts are not as willing to alimony when there is no legal divorce involved.

A Divorce May be Better

A divorce ends your marriage, and while that can seem upsetting to some, it allows you to move on. In Florida, your only other options are to stay in a miserable marriage or opt for a trial separation. A trial separation may be helpful as you and your spouse spend some time apart and decide whether or not to stay married. However, ultimately, a divorce will probably be the best option, especially if you decide that the marriage is broken and you want to move on. A divorce is a legal process that requires both parties to follow laws and guidelines. If your spouse fails to do something, such as pay child support, you can take them to court and have a judge resolve your issues.

A separation is different from a divorce, but has many of the same elements. Sometimes a separation is better for financial reasons, but if you truly want to move on from a broken marriage, a divorce is the better option.

If you are no longer happily married, Broward County divorce attorney Scott J. Stadler can help you understand your options, even though legal separation is not an option in Florida. Get started today by calling our office at (954) 346-6464.