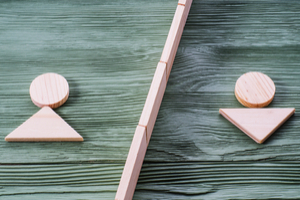 When a marriage is in trouble, the first thing people tend to think of is divorce. However, separation is another possibility. While Florida does not recognize legal separation, it does allow a married couple to live separately without the need for a divorce. This is called limited divorce and can be done on three grounds – voluntary separation, cruelty, and desertion. To qualify for a limited divorce, a party must be a Florida resident for at least six months before starting the process.

Separation and divorce differ in that divorce dissolves a marriage, while with a separation, or limited divorce in Florida, the marriage is still valid. The couple will legally remain married until they file for divorce. However, there are some laws that apply and some agreements that need to be put in place.

In many cases, a separation often leads to a divorce. In these situations, there may be confusion about property rights, since the court could make the date of separation—rather than the date of the divorce—as the cut-off date.

Because of this, it is important to speak to a lawyer to understand your rights. Because there are no laws in place for separation in Florida, the process can get complicated.

Under Florida law, a married couple can live separately. To formalize the terms of the separation, though, the couple must abide by certain agreements. For example, the couple must fill out a separation agreement and sign it. This document will likely be detailed, as it should outline issues related to debt, property, and children. Both spouses must follow its rules. The court, however, can not approve it or resolve disputes. It is recommended that this is approved by an an attorney who is familiar with family law.

If children are involved, the spouse who has custody can file a petition for support. The spouse who leaves the house may be ordered to pay child support and alimony.

A couple who is separating may wish to consider a postnuptial agreement. This document outlines various elements, such as property division, assets, debts, alimony and other issues should the separation lead to a divorce.

To help the couple finalize various aspects of their separation, the courts in Florida can decide on child support matters. It can decide on child custody matters by establishing the child’s primary residence. The court can make decisions about visitation as well.

Pros and Cons of Separation

A separation is ideal for couples who can not divorce for religious reasons. They can still be legally married, but live in separate houses. They may even decide to live as they are divorced, but without having to deal with the social stigma of being divorced.

There are also financial benefits of being separated. While there is still the cost involved with hiring a lawyer and going through all the same elements as a divorce, the couple is still legally married in the eyes of the law. Therefore, they can continue to reap tax benefits, since they can file jointly as always. They also can receive healthcare and insurance benefits, since they are entitled to these benefits under a spouse’s employer. There are also Social Security and pension benefits to consider.

Unlike a divorce, there is no need to worry about selling the home. One spouse can continue to live there, while the other can move out and live where he or she pleases. There is no need for a refinance or some creative solution to split the home. A separation can also help a couple feel more comfortable as a married couple. This can be helpful for children, as well. After some time apart, the couple may even begin to live together again, such as in a trial separation.

There are some cons to separation, though. Because the couple is still married, they must share their debt, even though they are living separately and not sharing expenses. There may also be issues regarding inheritances. If one spouse dies and leaves a possession to someone else besides the spouse, things can get complicated, especially if the asset belonged to both spouses.

Another thing to consider is the possibility of divorce down the road. The financial situations of the spouses could change over time. The dates associated with property rights may become blurred. As a result, this could make the divorce more complicated if and when the couple decides to proceed with it.

The biggest disadvantage of separation is that the process is pretty much the same as going through a divorce. One party can not simply move out. The separation process addresses the same issues as a divorce, such as property division, child custody, child support, and alimony. As a result, a separation can be just as emotional and stressful as a divorce. It is still an overwhelming process, especially if children are involved.

Consider this guide when determining whether a separation or divorce would be best for you. Each family situation is different, and while most couples in turmoil would rather divorce and move on with their lives, sometimes separation makes more sense, particularly from social and financial standpoints.

If you are considering separation or divorce, get the facts from Palm Beach divorce attorney Scott J. Stadler. He has 30 years of experience handling family law issues and can help you move on from a troubled marriage. He understands the law and can help you understand your options if your marriage is in a rough spot. Call (954) 346-6464 to schedule a consultation.