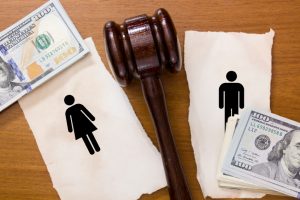 In any divorce, parties are not only concerned with emotional matters that may arise throughout the divorce procedure, but also with the financial matters, mainly asset division, of a divorce. Deciding who gets the marital home and even figuring out how much alimony, if any, a spouse may receive can be stressful topics to deal with in addition to figuring out how each party will move forward after the divorce. Not all property is treated equally, however. While individuals may own personal property in a marriage, there are forms of property that might be exempt from the asset division of marital property in a divorce. Even pension or retirement benefits are not exempt from such asset division.

Even though most court dramas might depict asset division in the United States as a 50/50 split of property, in most jurisdictions, the court will typically make an equitable division of the property. While Florida law does refer to an equitable distribution when detailing the regulations of property division, under Florida Statute 61.075, an equal split of property between spouses will generally be found to be an equitable one. In certain cases, the court may consider an unequal division of property, but there must first be some justification for an unequal distribution.

Factors that can justify unequal distribution include:

While one party may potentially receive significantly more than the other in a divorce, as with any family law matter, the outcome is entirely dependent on the facts of the particular case.

Once a court determines whether or not an equal distribution is in fact an equitable distribution of property, the next issue the court will look to is whether the property owned by the parties can be divided by the court. In a divorce there are two different classes of property. These property classes are known as marital and non-marital property. While they may seem fairly easy to define on their face, the division between marital and non-marital property can be subtle, and at times, very complex.

Even though the court will not divide marital property, it is necessary for the court to obtain a full record of all property owned by the parties in order to make an equitable decision regarding such issues as property division, spousal support, and even child custody.

This can include a multitude of different forms of property, including, but not limited to:

When it comes to retirement benefits, however, matters can become a little trickier. While many people think that their own pensions or work benefits gained from retirement might be their personal property, since they were the ones that spent the time working for such benefits, in many situations, courts have found such benefits to be marital property. In fact, under Florida Statute 61.075, the definition of marital assets and liabilities includes “all vested and nonvested benefits, rights, and funds accrued during the marriage in retirement, pension … and insurance plans and programs.” There are, however, differences between the different types of retirement benefits.

In order to divide retirement benefits between spouses, a Qualified Domestic Relations Order (QDRO) will need to be prepared. A QDRO is an order establishing a right for an individual, usually either a spouse, former spouse, or child of the individual, to obtain a percentage of the retirement benefits. These benefits can be obtained as either spousal support, child support, or even as marital property rights in a divorce, but are limited by the boundaries of the plan. Not all pensions or retirement benefits will be available. For example, government and federal retirement benefits or pensions are generally exempt from being considered in a QDRO, which precludes them from being divided in divorce proceedings. While parties can agree to give up other forms of property to cover the amount that would have been obtained, it is ultimately up to the governmental entities to decide whether they will accept or reject the QDRO, thus incorporating the benefits into the plan.