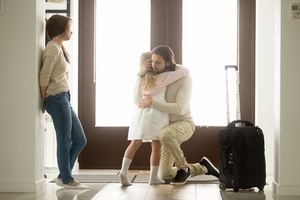 There are several types of child custody — legal, physical, sole, and joint custody. Legal custody refers to the ability of the parent to make important decisions for the children, such as education, religion and medical treatment. Physical custody means that the child lives with the parent. Sole custody is when one parent has both legal and physical custody of the child, while the other parent has visitation rights only and cannot make any decisions for the child. Joint custody means that both parents have legal and physical custody of the children.

Most courts aim for joint custody. This is because research shows that when both parents are involved in their child’s life, the child benefits. Even if the parents are in conflict, courts try to allow both parents to have custody for the child’s well-being. Children who grow up in single-parent households are more likely to commit suicide. These children represent 70% of high school dropouts and 90% of runaway children.

Because of these alarming statistics, it is important for children to have both parents involved in their lives, according to a recent report card from the National Parents Organization. The agency believes that both parents should commit to the upbringing of their children, whether or not they are together. However, not all states are making the grade when it comes to child custody statutes that reinforce this idea. In fact, one-third of the country’s 50 states earned a D+ or lower for encouraging shared child custody.

earned a grade of C grade or better on the National Parents Organization’s report card. On the most recent report card, 17 states earned a D or F.

The goal of National Parents Organization is for the parents to have parenting time that is as equal as possible but at least one-third of the time. Grades were determined based on 21 factors, including the state’s child custody laws, whether those laws permit shared parenting, if they encourage shared parenting and whether or not they show a preference for joint custody.

How Did Florida Fare?

Florida did not fare too badly. The state was graded a C+ for its custody laws. Half of all states received a grade of C. While it did not earn an A like Arizona or Kentucky, it did not fail, unlike New York and Rhode Island—two states that have not passed any shared parenting bills in the last five years. Florida’s laws have many positives, but there are also a couple things it can improve upon to make shared child custody more accessible.

First, the good news. Shared child custody is an inherent part of Florida’s laws. Under Florida Statutes Section 61.13, “the court shall order that the parental responsibility for a minor child be shared by both parents unless the court finds that shared parental responsibility would be detrimental to the child.” An example of when joint custody would be detrimental to the child  would be if the parent was convicted of domestic violence or sex abuse with a charge higher than a first-degree misdemeanor.

In addition, Florida encourages parents to be friendly toward each other, under the same law. “The demonstrated capacity and disposition of each parent to facilitate and encourage a close and continuing parent-child relationship, to honor the time-sharing schedule, and to be reasonable when changes are required.” The law wants parents to focus on the child’s needs and not the desire for the parents to seek revenge on each other. The state wants parents to be mature and act in an amicable fashion, not badmouth each other and pit the child against the other parent. This is important because children are often brainwashed by parents and treated like pawns, which can cause them to have animosity toward one or both parents.

Another interesting take-away from Florida’s child custody laws is that there are penalties involved for parents who provide false allegations of abuse. When looking at the best interests of the child, the court will look at “evidence that either parent has knowingly provided false information to the court regarding any prior or pending action regarding domestic violence, sexual violence, child abuse, child abandonment, or child neglect.” This is likely because many custody battles are based on false allegations, and many parents will erroneously claim abuse by the other parent simply so they can have sole custody of the children.

There are two drawbacks to Florida law that the state can work on to achieve a higher grade next time. One, the state laws do not explicitly create a presumption or preference concerning physical custody. Also, shared parenting is not necessarily the rule during temporary orders. This is not explicitly addressed in the Florida statutes.

Shared custody is typically in the best interests of the child. If you are a parent fighting for your right to have physical or legal custody of your child, you need someone on your side.

If child custody is your goal, we can help you achieve it. Get the help you need from Palm Beach divorce attorney Scott J. Stadler. Child custody battles can be complicated and time-consuming, but our experienced team can help. Schedule a consultation today. Call (954) 346-6464.