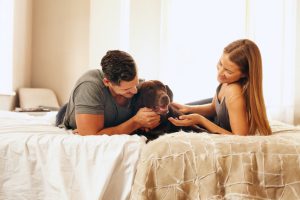 It is no surprise that many pet owners love their animal friends. According to statistics gathered by the American Pet Products Association, it is estimated that Americans will spend around $60.59 billion on their pets in 2015 alone. In many cases, pet owners may even consider their pets to be family members on par with children. What happens, then, when a relationship is broken up through divorce? While some people might want to treat their pets as children in a divorce proceeding, the court takes a different view when it comes to pet custody. Because of the drastic difference between people’s perceptions and the court’s treatment of pets, it is important to work with your spouse to find the best possible option for all involved, including your pets.

In order to better understand the difference between the treatment of pets and children under the eyes of the court, it is important to first look at basic custody principles. In Florida, as with any U.S. jurisdiction, when parents want to decide a custody matter, they will need to take the matter through the court in order to have a judgment on record stating how much time and responsibility each parent has over the minor child. Interestingly enough, there only needs to be parentage in order to decide a custody case, not marriage or divorce. In Florida, the custody determination is established through a parenting plan and timesharing schedule.

While it is possible for parents to agree to a parenting plan and timesharing schedule outside of court, there are times when it is necessary for the court to intervene. While most people might view a custody determination as something that is based on the desires and abilities of the parent, in any custody matter, the primary concern of the court is the best interests of the child. While this term can be a bit vague in certain circumstances, Florida Statute 61.13 lays out certain factors that may be considered when determining what is in the best interests of the child, including, but not limited to:

While the court recognizes that each parent has a general right to spend time with and have responsibility over each parent, the same is not true for pets.

While it might seem a bit cold, under the eyes of the court a pet is no more than personal property, much like a vehicle or home. While most pet owners may consider their pets to be part of the family, the court will only decide what happens to the pet under the basic property division principles of that jurisdiction.

Under Florida Statute 61.075, the court will generally seek to provide an equal split of property between spouses. In deciding who gets which property, the court will tend to look at a number of factors, such as how much was invested in the property. The court will generally seek to make an equitable distribution of property, regardless of how strong an individual’s emotional bond might be with the pet. For example, if a party owns a pet before beginning the marriage, and the pet is still around when the marriage dissolves, then the court will likely provide the original owner with the pet. However, if it can be shown that the other spouse invested in the pet by putting time or money in raising and caring for the pet, then the court might give the pet to the opposing spouse. Because the court will seek to provide each party with an equal share of the property it can be difficult to say what a court might ultimately decide. In certain cases, however, the court may provide an unequal distribution of property if it finds that such a division is justified.

In making this determination, the court will look to several factors, including:

As with any case, however, the outcome of a pet custody matter depends entirely on the facts, and if it goes to court, will be in the hands of the presiding judge. While the courts may view pets as property, most pet owners know that pets can be much more than simply property. Fortunately, there is another option available to pet owners who wish to establish clear boundaries when it comes to pet custody.

One of the primary benefits of a separation agreement in such matters is that parties are allowed to clearly define and lay out an arrangement that benefits all parties involved. Parties to a divorce can agree to set a plan detailing how much time each party gets with the spouse, who is responsible for basic costs of the pet such as food or bedding, who will be responsible for medical expense, as well as any additional concerns.