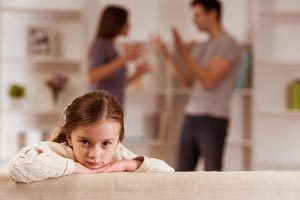 The divorce process is difficult for everyone involved, and that is perhaps most true for children. Younger children often do not understand what divorce is and older children can become resentful. Parents must be aware of the impact divorce can have on their children in order to make the process as easy for children as possible. However, sometimes a marriage deteriorates to a point where there is a lack of communication, or at least a lack of civil communication. Unfortunately, when that happens, it is not uncommon for parents to try and use their children against each other. Sometimes it is not intentional, but other times a parent actively seeks to damage the relationship a child has with the other parent. This is known as parental alienation. When parental alienation occurs, a child can develop what is referred to as parental alienation syndrome.

According to Newsweek, parental alienation syndrome was first referenced by psychiatrist Richard Gardner in 1985. While relationships with children are unique to every parent, there are some common types of behavior that indicate parental alienation is taking place. Some of these behaviors include:

These are only some of the common behaviors a parent may engage in while attempting to alienate a child from the other parent.

Symptoms of Parental Alienation in Children

Dr. Gardner listed eight symptoms of parental alienation that appear in children. According to SocialWorkToday.com, these include:

Some of these signs may be easier to spot than others, and some may just occur in the normal course of a child’s development. If you suspect parental alienation is taking place, you might consider approaching the topic with a child psychologist or other professional who can help determine the source of a child’s negative behavior.

These are just some of the ways you can combat parental alienation. If you believe the alienation is unintentional, simply communicating your concerns with the child’s other parent can make a world of difference in all of the relationships involved.

Your relationship with your Florida divorce attorney does not necessarily end when a divorce is finalized. There may be times when you need to return to court, such as to request the modification or enforcement of a custody order. If you have questions or concerns about custody or other divorce issues, or if you are interested in seeking the modification or enforcement of an existing custody order, contact Scott J. Stadler to schedule a consultation where you can find out more about what might be involved in the process.