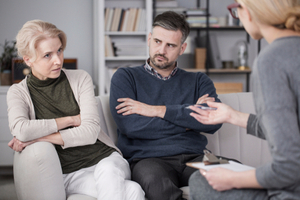 When portrayed in the media, divorce is often seen as a nasty battle, with the spouses yelling, screaming, and hurling insults at each other. There may even be physical abuse involved. While this can happen, this is not the norm. There are situations in which a couple may battle it out in court, but far more often, divorces are settled before then. More than 90% of divorces are settled outside of court. This means that just one in 10 divorces go all the way to court.

There are several situations in which a divorce case might have to be settled before a judge. One example is when there is a child custody battle. While minor disagreements can often be resolved through mediation or arbitration, if the parents are not even on the same wavelength, then the case will likely have to go to court. This is often the case when one parent is trying to deny the other parent any sort of custody or visitation. If both parents want primary custody of the child, and neither is willing is budge, then this can lead to a court battle, as well.

Financial issues can also make a divorce go to court. Florida is an equitable distribution state, which means assets are split fairly based on one’s contributions to the marriage. This means that a spouse who earned more may wish to receive a higher percentage of the marital estate. The other spouse may disagree, however, so it is not uncommon for the spouses to take their case to court and ask a judge and jury to decide how assets should be divided.

A spouse with high expectations in a divorce may be disappointed that he or she is not getting their way. They may refuse to compromise on any issue and with this attitude, mediation and arbitration would simply be a waste of time and money. The case would be taken to court, where a judge will make the final decision.

It is preferable that a divorce goes to court in some cases. For example, if there is abuse involved or one of the spouses has a substance abuse issue, then trying to handle the case outside of court may not be the best choice. Let a judge decide based on these issues.

The good news is that not all divorce cases have to go to court. There are alternatives to trial. The most common ones are mediation and arbitration.

Mediation is the most common way to resolve differences in a divorce. With mediation, a person can have a mediator assist with resolving all the issues in the divorce, including property division and child custody. Mediation often take six to 10 sessions and costs around $5,000.

Mediation involves a neutral party who helps you work out your issues with your ex-spouse. The mediator cannot make decisions for you or tell you what to do, but he or she can answer any questions you have so you can make the right choices. The mediator will also move things along should you and your ex have communication issues or come across roadblocks.

There are six stages of mediation:

Many people prefer mediation because it is fast and inexpensive compared to other options. It results in less stress and drama for all involved. It is an especially effective option for those who have children.

Arbitration is another form of alternative dispute resolution. While arbitration is used for many types of legal cases, it is still new for divorces. Arbitration is different from mediation. In fact, it resembles a trial. Like a court case, you would provide documentation and witnesses. An arbitrator would then rule on your case.

Arbitration is like a trial, but the rules are a bit more loose. You and your spouse can decide whom to use as your arbitrator. The case can be heard in a comfortable setting (like an office) rather than a courtroom. The process is also much quicker than a trial, which can take months or even years. With arbitration, you set the times when you can meet.

The arbitrator will hear each side and make a decision. This decision is final. Unlike a trial, there is no appeal process, so you will have to accept the decision. This is why many people prefer mediation, since they have more control over the outcome.

A divorce does not have to culminate in a nasty court battle. You and your spouse can resolve your differences amicably so you can move on with your lives with little stress.

If you are looking to end your marriage without drama, Palm Beach divorce attorney Scott J. Stadler can help you understand what options are available. Mediation and arbitration may be right for your situation. To learn more, call (954) 346-6464 today.