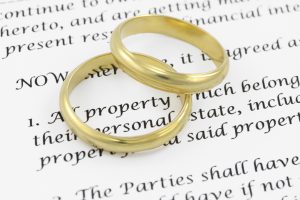 When it comes to marriage and divorce, a lot of data gets thrown around. Most people are familiar with the statistic that around 50 percent of all marriages end in divorce, and while this statistic is not too far off from the truth, there is much more data that can change the outlook of divorce in America. It is important to keep in mind, however, that every marriage is different, and that while data may reflect an increased likelihood of either the success or failure of a marriage, the outcome ultimately depends on the particular facts of the marriage.

Before getting to any of the underlying factors, one of the first things that most people look at is the frequency of marriage and divorce. In fact, one of the most widely known divorce statistics is the assertion that approximately 50 percent of marriages end in divorce. While people may want to throw around this statistic in an attempt to console friends or family members who have gone through a divorce, the truth is that divorce is much more complex than a simple statistic. In fact, while fewer people are getting divorced than in previous years, it is also true that the popular calculation of divorce rates is inherently faulty. While the famous 50 percent statistic was obtained by comparing the number of divorces in a year to the number of marriages in a year, there is no indication that half of all marriages entered into ultimately terminated due to divorce. Keeping that in mind, researchers have identified certain factors that may have an effect on a couple’s risk of divorce.

The age of a couple has a big impact on a couple’s risk of divorce. While most people might assume that divorces are primarily for younger couples, the divorce rate in older couples has almost doubled over the years. While there may be several other factors involved, the data shows that divorce is not limited to young, impulsive people, and can affect people of any age group.

While some people might assume that subsequent marriages following a divorce would lead to a more successful relationship, researchers have found that there was a stronger probability that second marriages would end in divorce. That being said, there are many factors aside from the frequency of marriages that can have an effect on the success or longevity of a current marriage.

While the location of a marriage would generally not affect the rate of divorce, studies show that not all divorce rates are equal in the US. In fact, in some states, the divorce rate is higher than others. For example, in Nevada, which has the highest divorce rate in the state, approximately 5.5 per 1,000 marriages end in divorce. Married couples in Iowa, on the other hand, have the lowest rate of divorce. While most people may point to locational differences and cultural issues, there is also a legal aspect to be aware of. In order to obtain a divorce in the US, a party must first be a resident of a state. While most states require an individual to live within the state for at least six months in order to be considered a resident, in Nevada, an individual must live within the state for only six weeks in order to apply for divorce.

While most people are aware that the location and age of the parties may have an effect on the risk of divorce, researchers have also looked at other underlying factors. One such factor is the type of wedding each couple had. Researchers from Emory University found that, generally, the amount parties spent on a wedding was inversely related to the longevity of the marriage. In addition, couples who spent less than $1,000 on their wedding were the least likely to get a divorce. This data, however, was not only limited to the cost of a wedding, and extended even as far as the price of engagement rings. Furthermore, while the cost of a wedding was inversely related to the longevity of a marriage, the number of guests was also found to have an effect on a marriage. Researchers found that marriages that had a larger number of wedding guests were more likely to last longer than weddings that did not have as many wedding guests.