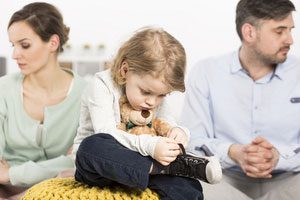 Divorce can often be a contentious experience. It is never an easy process and can take an emotional toll on the strongest of individuals. It can also cause conflict that has remained under the surface to bubble up or even cause conflict to arise that did not previously exist. In the midst of divorce and dealing with conflict, it is important to remember that there are productive ways to approach conflict. It is even more important to be aware of conflict and its negative impact when children are involved in a divorce. The following tips, adapted from a classic article from DivorceMagazine.com, can help you minimize conflict during a divorce and keep children away from situations in which conflict could arise both during and after a family split.

Prepare for the Possibility of Long-term Conflict

Typically, the divorce process is filled with various conflicts, with some more serious than others. However, conflict does not necessarily end when a divorce is finalized. A productive way of facing such conflict is to acknowledge the likelihood that it will arise at some point. As conflict arises, you should also take note of the triggers. If certain behaviors often lead to conflict, you can begin to anticipate conflict and proactively approach it. One suggestion for proactively addressing conflict before it arises is to prepare a plan with the child’s other parent as to how you will address conflict when it arises in a way that minimizes its impact on your children.

There are many emotions involved in divorce, some healthier than others. No matter how well you are able to communicate with your children’s other parent, you are likely to experience a wide variety of different emotions ranging from frustration to sadness and loneliness to anger, with many others in between. It is important to cope with these emotions in a healthy, productive, positive way. Often, the first step to doing this is to acknowledge your feelings. Awareness of your personal feelings during and after a divorce can help you keep those emotions in check. This may require the assistance of a mental health expert, especially in situations where conflict takes center stage and communication is difficult. If you become stuck in your emotions, it will become difficult to break the cycle of conflict that will accompany them.

Anger can be debilitating, especially when it accompanies other emotions likely to surface during and after a divorce. While it may be difficult in the short-term, controlling your anger will often help establish positive long-term communication with a co-parent. It will also help your children understand the importance of appropriate behavior and prevent you from inadvertently endangering your relationship with your children and/or their co-parent. It is important to recognize that anger can slowly impact your parenting, too. No matter how angry you are, especially in situations where a co-parent has engaged in activity that has led to divorce, it is important to move past that anger to ensure positive relationships between you, your children, and their co-parent.

Keep Children Away from Conflict

While it may seem pretty straightforward, it is often not as easy as it sounds to keep children away from conflict. The truth is, you may not be able to completely shelter children from all conflict that arises during a divorce, but you can avoid putting them in the middle of such situations. For instance, you should try to work out details about custody and child support in a private setting without your children present so that you can avoid sharing any personal and potentially damaging information with them that they do not need to know.

Sometimes, the cause of conflict can be lack of specificity in your parenting plan. When you work with your co-parent to create a parenting plan, make sure that you cover every detail. Be specific about drop off times, vacations, and other details relating to your custody arrangement. This will help you avoid conflict down the road even in situations in which you do not anticipate such conflict arising. You should also plan to use a parenting plan as a way to iron out important details about school, medical care, and other important aspects of raising children.

Do Not Force Children to Take Sides

Many times, conflict can put you in a situation in which you feel the need to ask your children to make choices between you and your co-parent. A detailed parenting plan and preparation can help avoid these situations, but when they arise you need to approach them in a way that takes into consideration the best interests of the child. This may mean putting your own emotions and emotional needs aside, but it will help your children navigate the difficult waters of having divorced parents.

These types of conflicts do not just occur over vacations and similar experiences, but may also result from one parent speaking negatively about the other in front of children. If you allow situations to arise where children need to make choices between two parents, then they will often react by retreating from both parents. They may also begin acting out and eventually engaging in risky behavior. While it may be difficult to put your feelings aside, doing so typically results in a healthier relationship among everyone involved.

It will never be possible to anticipate all conflicts that could arise during and after a divorce. However, it is possible to plan on utilizing techniques that create positive, productive solutions when conflict does arise. By working together with a co-parent and putting personal emotions aside, you can take a situation that is likely to have a negative impact on everyone involved and turn it into an experience that helps you address issues in a way that will prevent them from arising again. It is important to understand exactly how you handle conflict in order to approach handling conflict in a productive way.

Awareness can be an incredibly useful tool in turning conflict from a wholly negative experience into one where everyone involved can grow from it. An experienced family law attorney can be an integral part of helping you manage conflict. An attorney can also provide you with additional tools and resources to help you effectively tackle conflict in a productive way during and after a divorce. If you are considering divorce or have already decided that divorce is the best option for your family, contact Scott J. Stadler to schedule a consultation where you can find out more information about what to expect during a Florida divorce as well as how you can approach conflict during divorce in a productive manner through tools like mediation or utilizing outside help.