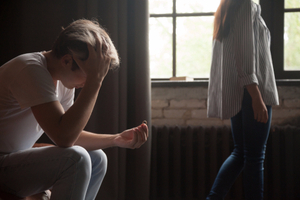 After a divorce, it is men who tend to be more financially well-off than women. They tend to have a better idea of finances, since they most likely have worked more throughout the marriage, while the women tend to stay home and raise children more often.

Even though they may not struggle financially, men do struggle in other ways, though not much is mentioned about these issues. Societal perception is that it is not “manly” to talk about these emotional issues, which ironically, is the primary reason why men struggle after a divorce. Men often keep their emotions bottled up. They do not seek support, unlike women, who often freely talk about their feelings with friends, family members, and counselors.

The problem is so severe that men actually have a harder time moving on after divorce than women. They face emotional, physical, psychological, and legal issues during this difficult time. Here are some reasons why divorce can be much more difficult for men than women.

They do Not Know What to Do With Their Feelings

Women tend to be more savvy when it comes to dealing with emotional issues. They have close friends and family members to whom they can open up. They are also more comfortable seeking professional help if needed.

Men, on the other hand, experience intense emotions during divorce, but often do not know what to do with them. They keep everything bottled up and do not allow themselves to grieve. They just continue on with life as usual, causing them immense stress and anxiety, which can lead to depression and even suicide.

As mentioned above, the emotions involved in a divorce can lead to depression. Men may not take care of themselves well. Their weight may go up and down. They may be unable to sleep. They may not even be able to focus on daily tasks because they are so consumed with their marriage ending. It takes a toll on their health and can cause heart disease, stroke, and other medical conditions.

Even though children need both parents in their lives, and under the law, men and women are considered to be equally good parents, men are still often at a disadvantage when it comes to child custody issues. Judges tend to favor mothers in this regard because on average, women spend more time with their children than men do. Only in cases in which a woman is deemed an unfit mother or the man is the stay-at-home parent would the man get custody of the children. It is possible for a man to fight this, but it takes a lot of time and money.

For this reason, men often do not get to see their children as often as they would like to after a divorce. It can be challenging to maintain a close bond and as a result, this can further push divorced men into depression.

They Lose Their Identity

A man’s ego is often focused on his marriage. By being married, a man feels worthy and has a sense of identity. Once the marriage ends, a man can lose this sense of identity. Divorced men often feel lost because their sense of self was based on their marital status. They must now understand their true identity and in the process, can encounter anxiety and anger.

Women, on the other hand, typically do not have this problem. They tend to be more social and can easily engage themselves in other activities to keep their minds off the divorce.

Men are More Likely to Engage in Self-Destructive Behavior

This loss of identity can cause men to go to extremes after a divorce. Instead of dealing with their emotions sensibly, some turn to self-destructive behavior such as using alcohol or drugs to excess. They may drive recklessly on the road, endangering themselves and others.

This is because their their egos are hurting. They likely did not initiate the divorce and while their wives moving on with their lives, they have lost their self-esteem. They feel as though they have nothing of value in their lives.

Because of their loss of identity, men feel better about themselves when they are in a relationship. Men often feel the need to start dating right away after divorce—maybe even before the divorce has been finalized. Men often do not give themselves time to grieve, so they go from one relationship to another to hide their feelings, and this can cause problems later on.

Women tend to be more cautious. Since they are just ending a marriage, they do not feel comfortable being in a another potentially failed relationship right away. They are more likely to spend time forming friendships, engaging in hobbies, and cultivating new interests.

It is often believed that women are the ones who get shafted in a divorce, but the truth is that men find it harder to move on. They must often deal with issues that are not made public, and while it seems like they can handle everything on their own, they can not.

If you are a man struggling with your divorce, seek help from Palm Beach divorce attorney Scott J. Stadler. He can help you find the resources you need to make your divorce as easy as possible.