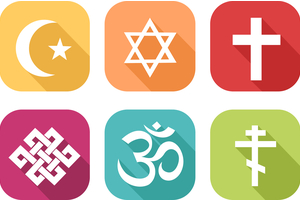 When it comes to religion, however, having differences of opinion does not seem to matter to many couples. In fact, interfaith marriage—when the spouses are of different religions—is common. Maybe you are Christian and he is a Jew. Perhaps your spouse is Muslim, while you are an atheist. With America becoming more tolerant of world views, these religious differences are becoming more evident in marriages.

So, what does this mean for your interfaith marriage? Is divorce imminent? Not necessarily. While being married to someone with a different religion from your own can be a challenge, it does not mean your relationship is doomed. There are different options you can employ. You and your spouse can choose to continue practicing your own religion. You can give up your religion and embrace your spouse’s. You can compromise and meet in the middle. However, if you are raising children together, you will likely need to choose a religion and stick with it to avoid confusion.

However, abandoning your religion to practice your spouse’s can have detrimental effects. Some experts say that when a person abandons a religion that they practiced their entire life, it is similar to burying a time bomb. That bomb represents the pressure that person is feeling. Over time, that pressure gets stronger and stronger. It builds up until it finally explodes. This explosion represents the tension that spouses feel while in an interfaith marriage.

Not every faith-based marriage has to end in divorce, though. By avoiding common mistakes, you and your family can make it through the good times and bad. Here are some things you can do to keep your marriage intact as you and your spouse keep the faith.

Ideally, couples should discuss religion before they decide to tie the knot. Many assume that having different religions does not matter, but it really does, especially if you are considering having children. In this case, you will want to have a unified religion so children do not grow up confused about what they are supposed to believe.

Do not ignore your religious differences. They may seem trivial now, but they could rear their ugly heads later on in the marriage. You cannot simply ignore the problem and assume that love will prevail. It will not. You likely had your religion before you met your spouse, so that will always come first.

Also, you need to consider that each religion has different traditions. For example, circumcision is common in many cultures, but it may not be with your religion. Also, some religions place significance on christening and baptism rituals. The Jews celebrate bar and bat mitzvahs for children as they come of age and become adults. What you decide to celebrate with your kids will depend on your religion, so deciding on one is a huge decision that should not be taken lightly.

Religion also affects holiday traditions. Christians and even non-religious people celebrate Christmas. Jews celebrate Hanukkah. Catholics celebrate Lent. The religion you choose will determine how you spend your time. If you and your spouse decide to keep your religions, the holidays can become a competition, which can cause resentment in your marriage.

Some couples decide on a religion and then cut their family members out of their lives, for fear of the repercussions. Unless your parents have physically or emotionally abused you, this is not a good idea. You should be open and honest with your family about your religious choices and be able to have a difference in opinion without ruining your relationship. However, if your family does have concerns about you marrying someone of a different faith, then you should listen to their concerns and take them into consideration before marriage.

Some people claim to be religious, but do not understand their own faith. Others force their religion and beliefs onto their spouse. Both of these are huge mistakes. A couple needs to present a united front, especially for the sake of their families. When a person gets married, their spouse becomes their priority. They should not worry about how their parents, grandparents, siblings and other family members will react, but they should protect their spouse from any criticism or blame.

Some people take their religion very seriously. Others do not really care or are not religious in the first place. Whatever your situation, it is best to discuss your expectations before marriage. This is especially true if you plan to have children.

Religious differences can lead to frustration and heated arguments in a marriage. Now is the time to seek professional help. If you cannot agree, then divorce may be the only option. Palm Beach divorce attorney Scott J. Stadler can guide you through the process so you can move on and enjoy your religion as you please. To schedule a consultation, give us a call at (954) 346-6464 today.