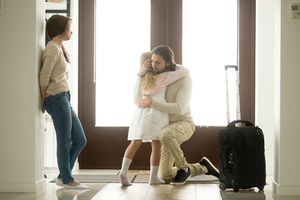 Many married couples are excited at the prospect of having children. Parenting is seen as rewarding and even an expectation in some cultures. Many couples go to great lengths to conceive a child. Some even spend tens of thousands of dollars on fertility treatments in order to have a child of their own. Others spend a lot of time and money going through the adoption process.

Raising a child is a lot of work. It is also not cheap, with medical bills, braces, sports, recreational activities and college tuition. In the beginning, it is diapers and car seats. As children get older, their wants often turn to designer clothes, smartphones, computers, gaming systems, and eventually, a car.

Of course, adding a baby to a marriage is not going to be all fun and games. Babies and young children are pretty much helpless. They need to be fed, clothed, and bathed, Diapers need to be changed. As children get older, there needs to be coordination with school, playdates, doctor appointments, soccer practices and other activities. Efficiently running the household takes precedence over date nights and deep discussions over world issues and political views. As a result, couples drift apart. The true love that they felt on their wedding day dissipates over time.

The negative effects of marriage when children are involved are there whether or not a couple is married. These effects are also present regardless of gender orientation, so it is even a problem in same-sex marriages. Income level does not play a role, so whether you are rich, poor or middle class, your marriage is bound to experience some negative effects once you have children. Location is also not a factor. The impact of parenthood on a marriage is found in other countries, even in those with more generous family policies.

Even though expectant parents anticipate the arrival of a child with excitement and great expectations, the reality is often far different. All this time and money spent on children puts a huge strain on a marriage. Women in particular become so focused on their children that their relationship with their husband takes a back seat.

A woman’s marriage and happiness is often negatively impacted when children come along. Happiness levels are highest on the day of the wedding, but they decline during the first few years of marriage. If the decline is steep, then the marriage will likely end in divorce. Once a couple has children, true love runs its course. A marriage becomes more of a business relationship as couples figure out how to coordinate their lives so they can work and raise children.

Having children leads to changes in identity as well. Couples go from lovers to parents. A wife becomes a mother. A husband becomes a father. With so many details involved in parenting, the couple grows distant. Sex and intimacy decline. There is less romance. Love letters and sexy texts are replaced by grocery lists and to-do lists.

Over the past 30 years, much research has been done on how having children affects a marriage. All studies point to the same results: Children have a profound effect on a marriage. When compared to childless couples, those with children have a decline in marital satisfaction that is twice as steep. When the pregnancy is unplanned, the effects are even more negative.

However, despite this decline in marital satisfaction, the risk of divorce also declines. So while the parents may be unhappy with their marriage and life in general, they are still together—which, depending on the relationship, may not be so good for the children. However, many couples believe in staying together for the children.

While women may be the ones who are more excited about the prospect of parenthood, they are also the ones who feel the most stress once children come along. Even though we are now in 2020, gender stereotypes still play a role in parenting. While many men today are more involved in fatherhood than their fathers were, it is still primarily up to the mothers to bear the brunt of parenting. This is true even when the woman works outside the home and does most of the household chores.

This leads to many problems. Women are often forced to cut back on their work hours or even quit their jobs altogether to care for children. This puts pressure on the men to bear the financial burden of the household. They need to make more money, so their focus becomes work, while women’s focus is on the children. This leads to feelings of resentment, frustration and guilt. Women tend to feel more isolated, especially when their friends have no children. They no longer have the camaraderie of colleagues or friends.

Many women are aware of these downsides to having children, and so more and more women in the United States are choosing to remain childless. The number of childless American women increased from 35% in 1976 to 47% in 2010.

While many people look forward to parenthood, having kids hardly ever makes a marriage stronger. Caring for children is a 24/7 task, especially when kids are younger. Much time is taken away from the marital relationship, which can cause distance between the spouses.

If parenthood has taken a toll on your marriage, Palm Beach divorce attorney Scott J. Stadler can help you understand your options. If you have tried communicating with your spouse and have been to marriage counseling, but nothing has changed, it may be time to end your marriage and focus on your children. Call our office today at (954) 346-6464 to schedule a consultation.