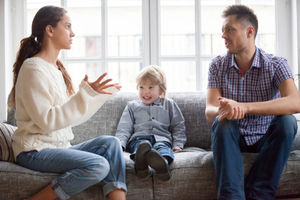 In a divorce with children, one of the things that will need to be determined is child custody. It is hopeful that the parents can determine this on their own. However, given that divorce is often a stressful and emotional time, it is not uncommon for the parties to have some bitterness or anger toward each other. Therefore, agreeing on child custody does not tend to happen.

While this is great news for fathers, it is important to understand that once a parent does get child custody, he or she can lose it at any time. It is not a permanent situation. If a parent engages in activities that can be harmful to the child, then the other parent can request that the custody agreement be modified. In some cases, a parent may lose custody of the children altogether.

When a parent loses custody of the children, he or she still has parental rights. These rights are not terminated. However, the parent will lose custody rights. a judge may award sole legal and physical custody to one parent. The parent still has rights to visitation, but they will be limited. In some cases, the visitation may even be supervised.

So, what exactly are some ways in which child custody can be taken away from a parent? If you are a parent in a divorce case, here are some things you should know so you can keep custody of your children and know when the other parent is engaging in activities that may cause him or her to lose custody.

Any type of physical or sexual abuse is grounds for loss of child custody. Physical abuse involves using hands, feet, or objects to harm or punish a child. It can result in wounds and scars. While some parents aim to discipline their child, many cross the line. This becomes corporal punishment and is often the result of anger issues. Substance abuse can also cause a parent to lose control and hit the children.

A psychological disorder can also lead to child abuse. Some parents were abused themselves as children. They do not know any other type of life, so they abuse their children as well, causing the cycle to continue. Judges have no problem taking a child away from a parent who physically abuses him or her.

Sexual abuse is another commont type of child abuse. A parent who engages in sexual acts with children or indecent exposure can lose custody. Child abuse is against the law, and the parent can also face criminal charges for these acts.

Neglect is a form of abuse, but instead of doing something, neglect is when a parent fails to do something necessary to care for the child. For example, not feeding or clothing a child is neglect. So is leaving a child outside or in a car unsupervised. Leaving a young child home alone while the parent goes out and parties is also considered neglect. Neglect can be hard to prove and is often noticed by someone who sees the child on a regular basis, such as a relative, teacher, or neighbor. Doctors can also determine if neglect is an issue.

It is often hard for parents to agree on how to raise their children. While disagreeing on trivial things such as clothing or homework will likely nor result in custody being taken away, custody issues can arise if there are behavioral or academic issues due to one party’s refusal to effectively co-parent. If the issues are more prevalent when the child is with the custodial parent, then the other parent may be concerned. If the custodial parent refuses to communicate with the other parent and the issues persist, then the judge may rule to give custody to the non-custodial parent.

If a parent is using alcohol or drugs to an extent that it is causing them to abuse or neglect their children, then they can lose custody. Alcohol or drug use in moderation can also cause a parent to lose custody, especially if it causes criminal issues, such as DUIs or reckless endangerment. Even cigarette use can be considered substance abuse.

The court will be looking to see if any substance issues negatively impact the safety of the child. If the child’s health and safety are at risk, then the parent can lose custody

Parents know that allegations of abuse are taken very seriously. Therefore, to get revenge against the other parent, one parent may falsely allege that the other parent has been abusing the child. However, by making false allegations, the parent is intentionally lying, which is a form of interference. The parent can see their custody get taken away because of these lies.

Judges do not take child custody issues lightly. Abuse, neglect, addiction, and alienation of other parent are some reasons a parent can lose custody. Make sure you take the proper steps to protect your rights.

Palm Beach divorce attorney Scott J. Stadler can guide you through child custody and other elements of divorce. Contact our office today to learn more about your options. Call (954) 346-6464.