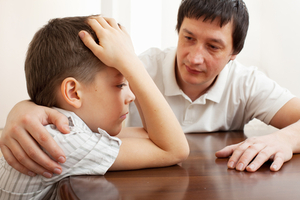 Anyone who has been divorced knows that the process can be emotionally charged and contentious. A divorce can be caused by many issues, such as infidelity, money problems, addiction and abuse. As such, many divorces do not occur without some degree of anger or frustration. By the time the spouses decide to divorce, it’s likely that the spouses are beyond sick of each other. They may have resentment toward each other and may even want revenge.

These negative feelings often spill over into their roles as parents. If there are children involved, the spouses will need to act amicably for the sake of the kids. After all, they are still parents and they need to work together to raise their children in the best way possible. This means keeping them free from physical and emotional harm.

While preventing physical harm is fairly easy to do, many parents are unaware that they are inflicting emotional harm on their children when they talk negatively about the other parent. This is called bad-mouthing, and it can hurt your child custody case.

It is common for one parent to say bad things about the other. These mean words may even be true. However, that does not make things better in the court of law. Words can hurt people and damage relationships. What you say about the other spouse can damage their parent-child bond, and no matter what you think of your ex-spouse, you need to keep your negative words and feelings to yourself.

Even if your kids are also angry at the other parent, you need to be the better person and avoid talking negatively about your ex-spouse, especially in front of the kids. If you need to vent, seek help from a counselor or talk to your friends or family members. Just avoid using your kids as your sounding board, unless you want to lose custody of them.

The courts take bad-mouthing seriously because the things you say can influence your kids’ opinion of the other parent. Badmouthing is seen as a tactic used to hurt the other parent as well as get one’s way. A parent who has no control over the situation may say bad things as a way to get some control back. Then a child may hear these negative remarks and feel differently about their mom or dad. They may start to harbor their own negative feelings toward the other parent. They may decide they want to spend less time with that parent or they may even refuse to visit the parent at all.

If this happens, the ex-spouse can go to court and convince the judge that you are purposely trying to sabotage the kids’ relationship with him or her. That will not look good for you. Therefore, it is important that you be careful what you say, even when the divorce has been finalized. Custody and visitation orders can change based on either parent’s negative behavior.

What Can the Court Do?

If you have asked your ex-spouse to stop bad-mouthing you in front of the kids or to your face, and they have refused to do so, what can you do? You can get the court involved. Judges make decisions with the best interests of the children in mind. Bad-mouthing is known to not be good for children. Therefore, if this behavior is common with one parent, the judge will take action to get the behavior to stop.

Oftentimes, the judge will order the parent in question to undergo a psychological evaluation or some form of therapy. Older children might be asked to come to court to tell the judge how often they have been subjected to the parent’s bad-mouthing. If nothing works, then the judge may even modify the current child custody order. The judge may be inclined to give less parenting time to the offending parent, especially if it can be proven that the parent’s bad-mouthing has been detrimental to the child’s well-being. In fact, many judges have removed or denied custody to bad-mouthing parents in the past. This behavior is called parental alienation and it can be emotionally harmful to children.

Courts can also do their part to prevent bad-mouthing in the first place. Judges can work with both parents early on, before the divorce is finalized, and help create a parenting plan that prevents negative situations from occurring. When both parents are on the same page in terms of raising their children, disagreements are less likely to occur.

A good parenting plan ensures that not just one, but both parents are involved in raising their children. It brings the parents together for a common purpose — doing the right things for the good of the kids. The ideal parenting plan also has a system in place so that the parents can work out any disagreements without getting the courts involved every time. Overall, it puts the child first and foremost, which is the way it should be.

Talking negatively about an ex-spouse may seem trivial, but it can actually have serious legal consequences. Courts want what is best for children, and this means growing up in a healthy environment. Constant bad-mouthing can ruin their relationships with their parents.

If your spouse is bad-mouthing you in front of the children, get legal help to protect your rights. Palm Beach divorce attorney Scott J. Stadler can step in and inform the court of the situation so they can make modifications, if necessary. Schedule a consultation today. Call our office at (954) 346-6464.