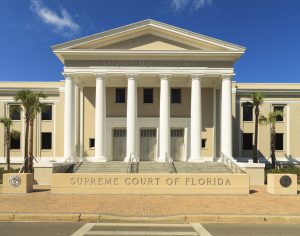 Divorce is a complex matter, and can be even more complex when the division of marital property is involved. Not only will courts use marital property to help determine such factors as property division and spousal or child support, but also, courts will take into consideration any personal property that was not made a part of the marital property. While the courts are guided by the law when determining how to divide property, it is possible for spouses to craft their own divorce agreement, usually through a prenuptial or postnuptial agreement, to assist in the dissolution of the marriage. Sometimes, even spouses who make separation agreements can run into bumps along the way. Recently, the Supreme Court of Florida ruled on the case Hahamovitch v. Hahamovitch, in which the court was asked to decide the extent of a provision within a separation agreement.

Before getting to the case, however, it is important to first look at property rules in Florida and how they can affect a divorce. Under Florida law, there are two recognized types of property – marital property and separate property. Marital property is any property that was owned or obtained during the time of the marriage or that was used in furtherance of the marriage. While this can cover a broad range of things, such as real estate, bank accounts, and even debts, there are exceptions to this rule. For example, while parties may be held to a court’s decision regarding property division, they will generally be free to enter into an agreement in order to lay out what property will be considered to be marital property.

In this case, the trial court held that the prenuptial agreement was valid as written and that both parties successfully waived and released all rights and claims they might be entitled to as a result of the marriage. Similarly, the Fourth District Court of Appeal upheld the trial court’s decision, noting that the decision was fair when it was entered into, as both parties voluntarily agreed to the provisions of the agreement, both parties had legal counsel throughout the preparation and execution of the agreement, that there were multiple drafts of the agreement, and that the parties put in a lot of effort to make an agreement that was fair to both Mr. and Mrs. Hahamovitch. In addition, the court considered that, even without the interest of the personal property in question, the wife would have walked away from the marriage with around $1.9 million to be paid over a seven year period.

Finally, the court noted that the language used was sufficiently broad enough to waive any rights each spouse may have had in the other spouse’s property. It did, however, point out that other districts, such as the Second District Court of Appeals in Irwin v. Irwin and Valdes v. Valdes, held that similar language would not be sufficient to waive such rights.

While the case was brought before the Florida Supreme Court, the Court agreed with the lower courts, pointing out that, under Florida Statute 61.079, parties may contract regarding the disposition of property upon divorce. In addition, the court reasoned that the language of the prenuptial agreement was sufficient to properly waive each party’s rights in the opposing party’s separate property.