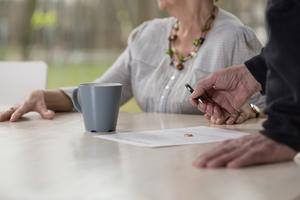 Divorce is a life-changing event that can affect any married couple. It does not matter how old or how young the couple might be, or even how long they have been married. While many people might assume that older individuals are immune to divorce, there has been a growing trend of later in life separations. While spouses who are separating at an older age might not have to worry about many of the same things younger couples might have to worry about, divorcing at an old age can come with its own issues and complexities.

While it is hard to provide exact statistics regarding divorce, there have been studies researching the trends in divorce over time. According to a study performed by the National Center for Family and Marriage Research, the divorce rate for married couples over 50 has doubled since the 1990s, with such divorces accounting for almost a quarter of divorces in 2010. In addition, researchers found that it was more likely for remarried individuals to divorce than it was for individuals in their first marriage.

Why Later in Life Separations Occur

In any marriage, there can be a multitude of reasons to divorce. Whether it is for ideological differences or simply boredom, a divorce can happen for almost any reason. That being said, there are some reasons that will generally apply more to divorces between older spouses than between younger ones.

One of the primary reasons that divorces may break up later on in life is because the spouses no longer have specific reasons to stay together. Whether it is because they do not have to be as concerned with finances, or more commonly, because they no longer have to worry about their children, older spouses find that the reasons they once had for staying together are no longer present. In fact, it is not uncommon for spouses to overlook faults or differences in the other spouse simply to keep the family together or to make ends meet.

Another reason that more divorces break up in marriages between older people is simply because people are living longer now than in previous years. With advances in medical technology and a better understanding of healthy living, it is not uncommon for people to live much longer than in previous generations. Older spouses are then faced with the possibility that they might have to live with their spouse for an additional 20, 30, or even 40 years. While that prospect might be something to look forward to in some marriages, others do not view it as favorably and chose to start anew through divorce.

As can be expected, there are a multitude of issues that can come with divorcing at an old age. While there are a few issues that are fairly common for divorces in general, there are others that present problems only older couples might encounter.

One of the natural consequences of a divorce is the splitting of a life that was previously built. In older divorces, the primary issue is that the people involved will have spent years, or even decades, building a life together. From shared bank accounts to business support, undoing all that work can be a costly thing for older spouses. In addition, spouses may be faced with dividing up their own pension payments for spousal support, which could require one or both spouses to reenter the workforce in order to make ends meet. In addition, issues can arise in the daily lives of the spouses beyond the divorce. For example, a spouse that did not handle the financial maintenance of the marriage would be less aware of what to look for or how to handle him or herself after the divorce is finalized. Issues between money are not the only concern when it comes to divorce, however.

While it is not common for older couples to have to worry about child custody issues in a divorce, a divorce can still have an enormous emotional impact on the children of the marriage, regardless of their age. While many people are aware that divorce can be a life-changing event for minor children, who might have to choose between living with one parent over another, a divorce can be just as devastating for the children of older parents. In many cases, the continued marriage provided an example of a stable and healthy relationship that they could look to. In addition, the continued marriage can serve as a reminder of better times. When that relationship ends, however, a number of questions may arise. The adult child may question his own memories of his early years, and in some cases, may even question the stability of his own marriage. Doing so can even cause perfectly stable marriages to crumble, with spouses thinking that if it happened to their parents, then divorce might be an inevitable consequence of their own marriage.

Another issue for older spouses who choose to divorce is the way they handle the divorce with their children. While it is highly suggested for divorcing spouses with younger children to provide a unified front for the minor children, older spouses with adult children might not feel like they have to take such precautions, since they think that their children would be able to handle everything that is going on. In the end, it is important to remember that regardless of an individual’s age, divorce can have an enormous impact on one’s life.