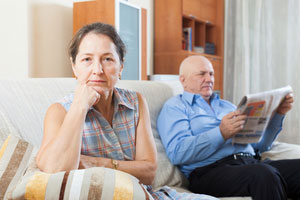 Divorce rates are declining overall, which is good news for those who are married. The bad news? Divorce rates are actually rising for those over 50. In the past, divorces tend to happen more with couples in their 20s and 30s, but that is no longer the case.

Dubbed “gray divorces,” more and more people over the age of 50 are ending their marriages. 50 years ago, just 2.8% of couples over 50 divorced. Today, that number has jumped to 15%.

This boggles the mind of many people. It is to be expected that couples in their 20s and 30s would face marital troubles and be more likely to divorce. After all, some marry too young and later find out that they have made a big mistake. Others succumb to pressures of money, family, children, and careers.

By the time a couple reaches their 50s, they have likely been married for 20 or 30 years. They have raised children and dealt with issues related to money and careers. So, why would they suddenly decide to divorce?

It would make better sense to get a divorce early on in the marriage. However, marriages sometimes go sour later on in life, particularly if the spouses are not on the same page in terms of goals and what they expect from their marriage.

One major reason why couples wait to divorce in their 50s, 60s, 70s, and beyond is that they have simply grown apart. This is a common issue for couples of all ages, but it particularly rears its head when a couple gets “empty nest syndrome.” When they are done raising their children and the last one moves out, it suddenly feels empty in the home. The couple’s purpose was to raise children, so what is next? During that time, the couple likely did not work on their marriage, so they are stuck living with someone who is basically like a stranger to them. They become uncomfortable around each other.

This same situation can happen in retirement. Once both spouses are retired, they find themselves spending 24 hours a day together. They may soon realize that they can not stand to be around the other person. They may have nothing in common. They may not want to do anything with each other. This can cause a marriage to break down.

Another big reason why divorces tend to happen later in life is because people are living longer. Even a 60-year-old could potentially live 20, 30, or even 40 more years. Once they are retired, people tend to think about their futures, and many do not see their spouse in the picture.

Why would they want to spend the rest of their life—potentially decades—married and miserable? Many people want to spend what time they have left happy.

When a person gets older, they sometimes feel unhappy. Aging is never easy, and many people in their 50s, 60s, and beyond just want to feel young again. This is especially true if their spouse is always complaining about their bodies hurting. They do not want to deal with that. They want to be around people who make them feel youthful. This is why many older men and women find younger and more attractive partners. They want to reverse time, and this works for many people. In fact, studies show that there are benefits to dating much younger partners, such as a boost in energy and better sex. Younger people are also more open-minded and tend to have less baggage.

Many couples divorce because one spouse wants to focus on self-improvement. In retirement, people tend to choose new hobbies and interests. Some may be interested in exercising, eating healthier, and dressing better. These changes often help them get noticed by the opposite sex, which can lead to affairs and divorce.

Along the same lines, in many couples, there is one spouse who is passive and one who is active. One spouse may want to go on vacations, engage in activities, and go out on the town several nights a week. The other may want to sit on the couch and watch TV or read books. In these cases, the active spouse is the one who ends up getting the divorce because they are no longer satisfied with their life. They want to go out and explore the world, while the other just wants to stay home, leaving the active person bored and unfulfilled.

Money and sex are also reasons for gray divorce. When both spouses are retired and no longer earning income, money issues may become an issue. There may be more focus on saving money and at the same time, the couple may butt heads if they have different philosophies on finances. Sex becomes a focus for many marriages. Some women still have an interest in sex, while men tend to become plagued with sexual performance issues as they age.

Gray divorces tend to affect those about to reach retirement, which means you may need to change your plans. How will a divorce in your 50s or 60s affect you financially? A lawyer and financial planner can help.

A divorce can be difficult as you get older. Protect yourself with help from Palm Beach divorce attorney Scott J. Stadler. He can assess your case and help you minimize the financial damage of a gray divorce. Call his office today at (954) 346-6464.