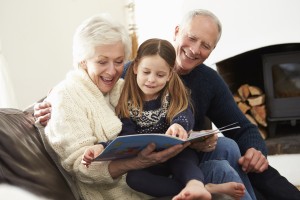 Most people recognize that a family can be more than two parents and a child. Aunts, uncles, grandparents, family friends, and even pets can be members of a close-knit family unit. Even though bonds can be built between parties who are not directly related by birth, however, the laws in the U.S. currently primarily protect the relationship between a parent and child. A parent will not only have the responsibility to care and provide for her child, but will also have a right to make decisions for the child, and will generally have the right to visit and spend time with the child.

While most people would not argue with protecting the relationship between parent and child, this right to visitation does not extend to other family members, grandparents included. This can be problematic when there is tension or disagreement between a parent and the in-laws, especially if the other spouse is deceased. Recently, however, there have been some changes to the laws in Florida regarding grandparent visitation.

Contrary to popular belief, child custody matters are not directly related to divorce proceedings. In fact, there are a whole set of rules and regulations under which custody and visitation decisions are made. This is important to note because, unlike with divorce, where courts are attempting to maintain a fair between spouses, the primary concern of any custody hearing is the “best interests of the child.” While this term may seem nebulous, Florida law does provide certain guidelines by which a court may determine the best interests of the child. Under Florida statute 39.810, factors that the court considers include, but are not limited to:

-the capacity of the parent to care for a child;

-the ability and disposition of the parent to provide and care for the child;

-the present mental and physical health needs of the child;

-any emotional ties existing between the child and any parents, siblings, or other relatives;

-the degree of harm that might arise from terminating a person’s parental rights; and,

-the length of time a child has lived in a stable environment.

– when the marriage of the parents of the child has ended;

– when a parent of the child has deserted the child; or

– when a child is born out of wedlock.

Interestingly enough, a grandparent’s right to visitation can continue even if the minor child is adopted by a step-parent. In order for visitation to continue, however, a court must first determine that it is not in the best interests of the child to terminate the grandparent’s visitation rights.

Once a petition is made, however, the focus of the court goes from the family’s circumstances to making a determination of the best interests of the child. While there is a list of general factors provided in the law, Florida also provides more focused factors in Florida Statute 752.01 that the court will consider. Under the old rule, some of these factors included:

-the willingness of the grandparent(s) to encourage a close relationship between parent and child;

-the mental and physical health of the child;

-the mental and physical health of the grandparent(s); and,

-the preference of the child, as long as the child is deemed to be sufficiently mature to express a preference.

One of the biggest updates to the grandparent visitation law is that there are new situations in which a grandparent may petition for visitation rights, replacing the prior three situations. Under the new law, a grandparent may petition for visitation rights if the parents of the minor child are either deceased, missing, or in a vegetative state. In addition, if only one parent is deceased, missing, or in a vegetative state, the surviving parent must have been convicted of a felony or offence of violence that may indicate that future harm may come to the child, in order for the grandparent to be allowed to petition for visitation rights. In this case, once a petition has been filed, a grandparent must then show that either the parent is unfit, or that leaving the child in the custody of the surviving parent will result in significant harm to the minor child. Naturally, the court must also consider the best interests of the child, and must find that the visitation will not materially harm the parent-child relationship.

While the prior law listed some factors that may be used to determine the best interests of the child in a grandparent visitation case, the update to the law expands the number of factors that may be considered, which include, but are not limited to:

-the length and quality of the relationship between the grandparent and child;

-the emotional ties existing between the grandparent and child;

-whether the grandparent established ongoing personal contact with the minor child before the death, vegetation, or disappearance of the parent(s); and,

-the reasons cited by the surviving parent in ending contact or visitation between the grandparent and minor child.