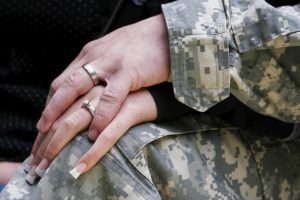 Divorce in any situation can be a stressful and complicated matter. Not only do spouses have to worry about how to divide the life they had previously built together, but they may even have to worry about what happens to the children of that marriage. In marriages where one or both parties are serving in the military, however, things can become even more complicated. Not only might spouses be living apart due to being stationed abroad, but also, there are a number of other considerations that apply only to spouses of the military. Below are just a few issues you might face if you are divorcing while in the military.

One of the interesting things about divorce is that, while it does end the marriage, courts only have jurisdiction to hear petitions of divorce over the residents of that jurisdiction. While this might not be a problem for most civilians, it is likely that a spouse who is serving in the military may be stationed abroad, or even in another state, for a number of years. One of the biggest questions at this point, is then, where should they file for divorce? Generally, a court would have jurisdiction over an individual who meets the residency requirements.

While residency requirements vary by state, more questions arise when it comes to servicemembers who are stationed abroad. Even though an individual may file for divorce in a foreign country, doing so could prove to be more costly and complicated than hiring an attorney within the U.S. to assist in the divorce process. Not only would the enforceability of a foreign divorce be uncertain within the U.S., but also, it is unlikely that the military would honor a pension division order from a foreign country. While selecting a place in which to file can be difficult, it is possible for parties of a divorce to agree to allow a court to have jurisdiction over their case.

Once parties have decided where they will file, one of the next big issues that affects all married couples is what to divide and how to divide it. As with any other divorce, the parties can agree to divide property outside of court in a separation agreement. However, in a divorce involving an individual who is or has served in the military, there is another question that arises. The court will divide property between marital property and separate property in order to determine what to divide between the spouses.

While it may not affect every married couple, the issue of child custody can be even more complex and heartbreaking than any other divorce issue. In any child custody case, regardless of the jurisdiction, the court will be concerned with the best interests of the child. Unlike in divorce proceedings, whether a court has jurisdiction over a child custody hearing is dependent on where the child is residing, as opposed to where the parents reside. While there are many factors that go into determining what is in the best interest of the child, such as whether or not a child will have a stable upbringing, or whether that child will be able to maintain a relationship with both parents, military spouses face challenges that are not as common for non-military spouses. For example, a military spouse may be stationed abroad for extended periods of time or may be stationed in a base close to where the children live. In either event, it is important for spouses to develop and agree to a parenting plan, in which the interests of the child are met and parents get the opportunity to maintain a relationship with the child, even if they do not retain full custody over the child.

Finally, there is the matter of spousal and child support payments. Spousal support is generally a regular payment made after divorce in order to provide support for a spouse. The amount of support to be paid is dependent on a number of factors, including the length of the marriage and the earning capabilities of each party. That being said, parties need to take into account the fact that there will likely be a difference between a servicemember’s active-duty pay and off-duty pay. If the parties involved cannot come to an agreement, then Service-specific guidelines may be enforced. Currently, such guidelines exist for the Air Force, Army, Coast Guard, and Navy & Marine Corps.

It is always important to remember that, while these are some ways in which divorcing while in the military may differ from a divorce between civilians, the outcome of each case is highly dependent on the facts. As such, it is important to consult with an experienced, dedicated attorney on divorce matters in order to get a better idea of how the facts in your case may affect the outcome of your divorce.