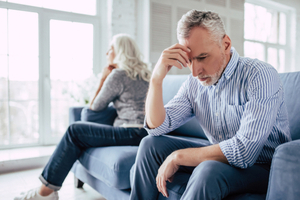 It can be a shock to hear that a friend, family member, or neighbor is getting divorced after many years of marriage. After a certain period of time, you naturally assume that a couple will stay together forever. After all, if they have been able to get along with each for 30 or 40 years, they should be able to stick it out “until death do you part,” right?

That was the way things worked in the past. It was rare for older couples to divorce. It was usually the younger couples—the ones who got married for the wrong reasons—who gave up after a few years.

Times have changed. People are living longer. Women are earning money and, in some cases, are even the main breadwinners. Many people are focusing on their own happiness. A person in their 70s could potentially live 10 or 20 more years, and that is a long time to stay in a miserable marriage.

However, filing for divorce after being together for decades is not an easy task. Splitting assets when you are older is complicated and costly. Lives will change. People will spread rumors. There is bound to be some anger. You may even regret that you did not do it sooner.

Divorcing in your 50s, 60, 70s, and beyond is different from divorcing in your 20s, 30s, and 40s. You have invested many years of your life in a failed marriage, and that can be heartbreaking. Will you be able to move on so late in life? Here are some things to keep in mind when a divorce happens later in life.

Be Wary of Comments and Stereotypes

When a divorce happens later in life, everyone who knows the couple will be stunned. Because there is no other way to explain the divorce, you can bet there will be rumors and comments about the real reason for the marriage’s demise. Try to ignore these comments as best you can.

Decades-Long Marriages do Not End on a Whim

When a couple who has been married for decades decides to call it quits, it is the result of something that has been happening for quite some time. A person does not wake up one morning and suddenly file for divorce, out of the blue. Something has likely been bothering that person for many years. A couple has likely been unhappy for a while. It is not like someone else came into the picture, although many people do have affairs later on when their marriage is going downhill.

Marital Past is the Biggest Factor

While most people associate gray divorces with a life transition, such as children moving out, this is not always the case. In fact, whether or not a person has been married before is the biggest factor that will determine whether or not a gray divorce will occur. Many of those over the age of 50 have been married previously, and when people remarry, they face a higher risk of divorce. Those who have been married two, three, or more times have a divorce rate that is 2.5 times higher than those who are in their first marriage.

Finances and Unemployment are Factors

While it is widely believed that couples tend to stay together when there are limited financial resources because they cannot afford to divorce, studies show the opposite to be true. Couples are more likely to divorce later on down the road when one party is unemployed or there are money problems. When there is financial security, couples tend to argue less. Not only that, but when there is more money to lose in a divorce, couples tend to stay together. Plus, more money brings more options, such as marriage counseling and activities for couples to do together—or separately, if they so desire.

Kids Will Struggle, Regardless of Age

Many couples delay divorce until their children are grown. However, the reality is that kids will struggle with the concept of their parents divorcing, no matter their age. Adult children always want their family to stay together. This is especially true when the children have children of their own and want their parents to have a strong bond with their grandchildren.

Even when both spouses agree that it is better to split up, many still grieve the breakup. These couples have often spent most of their lives together, so when such a long relationship ends—no matter the reason—it can be devastating. While the spouses do not necessarily regret their decision to divorce, they may sometimes wonder how their lives would be different or even better had they stayed together. For example, if there are grandchildren involved, they may wonder what it would be like to enjoy them together.

Happiness is not something you should forget about as you get older. If your marriage is not working out anymore, divorce is always an option. Get help from Broward County divorce attorney Scott J. Stadler. He can deal with your concerns and guide you through the process. Contact our office at (954) 346-6464 to schedule a consultation.