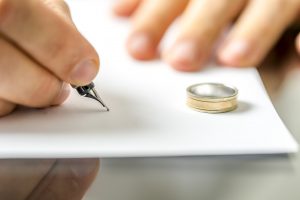 We have talked about all but the Contested Dissolution; now we address this type of divorce.

Initiating the action for Dissolution is the same – a petition for Dissolution
of Marriage must be filed with the court in the county where Petitioner resides.  The other side has 20 days from service of process in which to respond.

A contested divorce is perhaps the most difficult to navigate through, because it means you and your soon-to-be-ex cannot agree on the terms of the dissolution.  Child support, time-sharing, alimony and property distribution are the main points of disagreement.  Some divorcing couples cannot agree on anything.  There may be several reasons for this.  Emotions may be raw and the hurt feelings may spur one to be vengeful or spiteful and stubborn.  It may be that one party does not want the divorce, and is going to fight it at every turn.  In Florida it only takes one party to declare the marriage irretrievably broken, and if that party maintains that position, fighting the divorce will only delay the inevitable.  Another reason divorces are contested are if one party is refusing to give the other what they are legally entitled to under the Florida statutes.

Sometimes engaging in counseling or mediation will help smooth the way, and help the parties come to some agreement.  However, there are times that one party or the other refuses to engage in these methods, and the matters must be decided by the judge in the case.

Sometimes the main point of disagreement is regarding the children.  Issues of primary residence, schooling, religious upbringing and exposure to negative influences can be reasons for failing to come to agreement.  If there are questions of safety and well-being of the children, then it may be a good thing to let the judge decide where the children should reside, and what the time-sharing schedule should be.  Similarly, if there are domestic violence issues, it may be best for the judge to determine the matters regarding the children.

Unfortunately, sometimes the children are used as pawns in the war between the parents, and that is never a good thing.  The negative impact on the children in that situation can last for years and have far-reaching psychological implications.

The matter of child support may be problematic for one parent or the other, and that may be why the divorce is contested.  In Florida, both parents are financially responsible for the support of the children.  The judge will look at the relative incomes of the total parental unit and determine what the percentage each parent should pay for the children’s support.

The issue of alimony is one of the more hotly contested matters in a divorce proceeding.  If circumstances dictate, the judge can award alimony to either party.  The amount and duration depend on a number of factors, including age, health, education, the relative financial position of the parties, responsibility to children and ability to support oneself.  The length of the marriage is also a major factor in determining whether alimony is appropriate and the duration of the alimony award.

If the issue of alimony is a contested one, the judge could end up making an award that is higher in amount and longer in duration than was originally being asked for by the other party.  Unfaithfulness during the marriage can also affect the amount of alimony awarded, as the statutes allow the judge to take that factor into consideration when making an award.

A marital asset is one which was acquired during the time of the marriage.  This means any real property, personal property (such as vehicles), bank accounts, stocks, bonds, retirement accounts – pretty much anything of value is considered a martial asset if acquired during the marriage.  These need to be divided in an equitable fashion.  There can be set-off, such as one gets to keep the boat and one gets to keep the new car, but the dollar amounts need to be roughly equal.

People often become attached to their “stuff” and in a divorce situation, want to keep it (or just don’t want the other to have it).  They often resent the fact that something might have to be sold in order to satisfy an equitable distribution of marital assets.  If agreement cannot be reached, a judge can order the property sold and the cash distributed, or they can order which party gets to keep which property.

A contested divorce is going to be much more costly to the parties than one that is uncontested.  Simply put, the more hours your attorney has to spend on the matter, the more you will have to pay.  In the long run, this may not make economic sense, but those who are contesting the divorce for emotional reasons may not care.

If the divorce is contested because one party is trying to ensure they are being treated fairly, and receiving all they are entitled to under the law, then it may make economic sense.  Each situation is different, and you need an experienced family law attorney to help you with your particular set of circumstances.

It is best to try to come to agreement as much as possible prior to going to court, but there are some very valid reasons a divorce may be contested.  If you find yourself in this situation, you need to have an experienced, dedicated family law attorney.