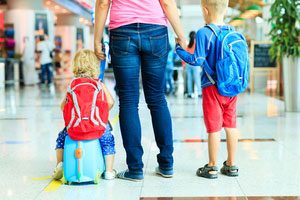 It has never been easier to get from one part of the world to another. All it takes is the ability to travel internationally, which usually comes with obtaining a passport, and the means to purchase a ticket to get just about anywhere you want to go. As such, families today are more diverse than ever. There are many factors that play into the individual relationships that exist in families, but regardless of the composition of a family, it is still possible that a marriage can end in divorce. Unfortunately, that often means difficulty in communicating with your former spouse or at the very least the development of a period of animosity between co-parents.

Regardless of the reason, taking children out of the country requires the consent of both parents. Unfortunately, once your kids are abroad, it can be difficult to bring them home even if the law is on your side. If you believe that a co-parent may try to take your children out of the country without your permission, it is far better to be safe than sorry. There are things you can do both during the divorce process and after to ensure that your children remain in the United States until such time as you feel comfortable.

There may be other instances of international parental kidnapping that are governed by the Hague Convention on the Civil Aspects of International Parental Child Abduction. This convention only governs issues arising between countries that have both signed onto the convention. Furthermore, the convention really only requires the return of the child to the country from which they were removed and not necessarily to the parent that remained in the home country.

As you can see, ensuring the return of your children once they have been taken abroad is a difficult process. While there are certainly options available that could help you bring your children back to the United States, an ounce of prevention can be worth a pound of cure. If you believe that a co-parent may try to take your children out of the country, there are two potential avenues that you could consider taking in court. The first is to ask for an emergency custody order that specifically prevents a child’s co-parent from taking the child out of the country. The second available avenue is requesting a restraining order be put in place against such action. It is important to recognize the potential for this type of devastating occurrences and be vigilant in ensuring your children’s safety and that their best interests are being served throughout the divorce process.

While these are clear orders from the court that may theoretically prevent a parent from taking children out of the country, they do not wholly prevent such action from taking place. They certainly serve as a deterrent from removing children from the United States, but if a co-parent wants to defy these orders, then he or she may still be able to find a way to do so. In cases where the threat of one parent taking the children out of the country is very real, you may want to go a step further.

For children, the passport process typically requires both parents to consent to the passport application. Exceptions to the two-parent consent requirements include:

Situations in which one parent can request a passport are rare, but may still potentially arise during your divorce. The Children’s Passport Issuance Alert Program has been established so that one parent can make a request to the United States Department of State, the entity that coordinates and monitors the program, to request they not issue a passport to your child. This is an effective preemptive away to avoid one parent being able to secure a child’s passport and subsequently abscond with the child overseas.

Generally, a parent does not have the right to interfere with a child’s passport if that passport was validly issued. Of course, obtaining a passport under false pretenses may invalidate it. However, if a passport has been obtained through valid means and you are concerned about the child’s co-parent taking them out of the country, then you may present your case to a Florida judge who could order that the child’s passport be surrendered to the court. A parent wishing to travel abroad with the child would have to ask the court to return the passport, and if the passport was ordered surrendered because of legitimate concern over the child being abducted internationally, then it is difficult to envision a court returning it to the parent from which the concern arose.

International kidnapping is a real fear for many parents in Florida and throughout the United States. However, it is not the only custody-related concern that arises during divorce. If you have custody-related questions about your divorce or custody orders already in existence, including learning more about how you can prevent the potential international kidnapping of your child, contact Scott J. Stadler to schedule a consultation and find out more information about the questions you have regarding Florida and/or international custody concerns.