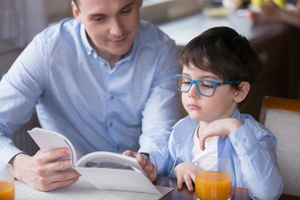 In divorces, there are often custody battles concerning the children. Both parents want custody and nobody is willing to compromise. In these cases, the court will decide who gets custody. The judge will consider the best interests of the child, but what exactly does this mean?

This phrase comes up a lot in the courtroom, but defining it is not so easy. There are many factors that determine what goes into maintaining the child’s happiness, wellbeing, security and emotional development. In addition, every case is different, as well as the parents involved.

One common theme in child custody cases, though, is that courts typically want the children to have strong relationships with both parents. Rarely will the court determine that sole custody is in the best interest of the child. Some instances of this occurring include situations involving abuse, neglect, substance abuse and incarceration.

The courts do not solely look at one factor. They take a look at numerous factors to determine if the child will be safe and happy while in the parent’s care.

Best Interests of the Child in Florida

Each state is different when it comes to determining the best interests of the child. In Florida, some of the factors considered include the following:

A judge might consider other factors as well when determining custody and visitation. This may include the physical and mental health of the parents and consistency. Judges like to keep children with the same routine whenever possible. They want children to continue going to the same school or at least stay in the same neighborhood. If one parent has been the primary caregiver since birth, that parent will likely be given custody to create a sense of routine.

However, the child can be allowed to move if it will be beneficial. For example, if a mother moves so she can be closer to family or allow the child to attend a better school, then the judge will likely approve. If, however, the reason for the move is to prevent the other parent from seeing the child, then the judge will not agree to the terms. Judges want both parents to be involved in their children’s lives as much as possible. Even if a parent has sole custody, the other parent will be allowed visitation rights to some degree.

The judges will also look for things that may be detrimental to the child and affect their safety and welfare. For example, if a parent is homeless and has little money to take care of himself or herself, let alone a child, the court may find that troublesome. Also, if a parent has a history of domestic violence or neglect, the judge may not find it in the child’s best interest to spend time with that parent. Supervised visitation may be in order. Substance abuse is another issue. Excessive drug or alcohol use can endanger a child.

What is Not Considered in Determining Best Interests of the Child

When determining the best interests of the child, there are several factors that the courts can not use. For example, one parent can not be considered to be better than the other simply because he or she has more money. A child does not necessarily benefit if a parent is rich, even though money does help provide for the necessities.

The gender of the parent also should not be a factor when determining the better parent. While mothers typically get primary custody of the children, a mother or father can be an equally good parent.

While the courts will consider the health of the parent when determining custody, a judge can not deny custody based on a parent’s disability. A person can still be a good parent despite a disability.

What You Can Do

It is important that you prove to the judge that you are a fit parent who is concerned about the welfare of your child. You should have your child enrolled in school and help with homework as needed. You should prove that you take your child to medical appointments as needed, attend extracurricular activities, and foster a relationship in other ways. If you have a bad relationship with the other parent, now is the time to take the higher ground and make amends. The judge will look at how you treat the other parent and may consider this in the final custody decision.

During a divorce, parents are often too focused on their well-being to consider what is best for their children. Divorce is a stressful and emotional time for all involved and it is important that the children’s needs are met. Children should not be used as pawns in a divorce.

With the right legal help, you can ensure that you are putting the children first. If you have concerns about the best interests of your children, Palm Beach divorce attorney Scott J. Stadler can help. He understands the law and knows what the courts look for in child custody cases. To learn more, give his office a call at (954) 346-6464.