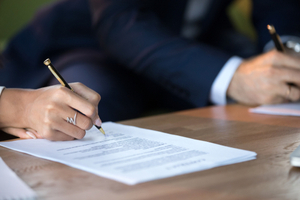 You may have heard the term ‘annulment,’ but what does it mean? What does it do to your marriage? Can you opt for one instead of a divorce?

A divorce acknowledges that your marriage existed and has ended. You are not disputing that you were ever legally married. An annulment, on the other hand, denies that your marriage ever existed. It is null and void. You will not have to deal with property division, since each party will keep what they owned before the marriage.

When it comes to children born into a marriage, however, there are some issues concerning legitimacy. There is a difference between a void and a voidable marriage. A marriage is void when bigamy, incest, or mental incapacitation is involved. In these situations, any children born are considered illegitimate because a void marriage is never considered valid.

No matter if the children are or are not legitimate, they still exist. Therefore, if an annulled marriage involved children, then there will be child custody and support issues to consider.

However, an annulment requires that you prove fraud, which requires a heavy burden of proof. Also, annulments can be more complex and even more costly than a divorce. It is hard to get an annulment because most marriages are deemed valid under Florida law.

There is not a lot of data on annulments because they are not tracked like divorces. However, studies show they are declining, even though they remain common in certain religions. There were 59,000 annulments in the United States in 1992. Many of those were granted to Catholics. Without an annulment, a Catholic cannot remarry in the church after a divorce. These annulments, however, are not civil annulments, as they can only be granted by clergy.

How to Get an Annulment

However, not everyone can get an annulment instead of a divorce. The laws vary from state to state, but are pretty much similar. If you want to annul your marriage in Florida, there are seven ways in which you can:

In Florida, there are seven ways in which a couple can get an annulment instead of a divorce. However, these do not apply to most marriages, so annulments are still rare. Most couples opt for divorce.

Is an annulment an option for you? No matter how you are trying to end your marriage, Palm Beach divorce attorney Scott J. Stadler can help. Let him settle all the issues in your divorce with less stress. Schedule a consultation today. Call our office at (954) 346-6464 today.