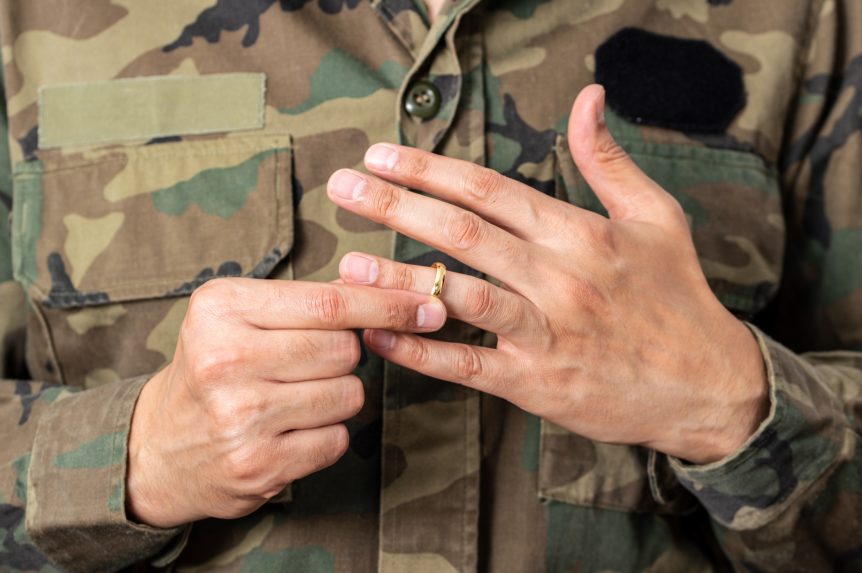 Like in any divorce, property obtained either before or after a divorce is considered separate property. Property acquired during the marriage is usually considered shared, or marital, property unless it was a gift or inheritance.

A military pension may need to be split in a divorce. In 2017, new federal restrictions were created that changed how these pensions are distributed in all 50 states. The main change is that the pension becomes locked in time as of the date of divorce, separation, or annulment. This prohibits an ex-spouse from receiving a higher-than-normal pension sum, which may occur if the ex-spouse gets promoted to a higher rank after a divorce.

However, there are some military benefits that would be considered separate property. These include VA disability compensation and Combat-Related Special Compensation (CRSC). That is because these benefits involve an injury or medical condition and are deemed separate property only. Current or former spouses are not eligible to receive them, so they are not split in a divorce.

The 20/20/20 rule is often brought up during a military divorce when determining an ex-spouse’s access to the benefits, even though they are no longer a military spouse. An ex-spouse is eligible if they meet these three criteria:

If the ex-spouse meets all of these requirements, they will receive the same benefits as a current military spouse for the rest of their life, unless they remarry. They will also retain their military ID card so they can assess base commissaries and military exchanges. While they will continue to receive TRICARE benefits, eligibility is not automatic, and they must be re-registered under their own names and Social Security numbers. They must also be able to provide original copies of their marriage certificates and divorce decrees to prove their ex-spouse’s military service or retirement.

Another rule that is often used in a military divorce is the 10/10 rule. It is similar to the 20/20 rule, but the amount of time is shorter. The 10/10 rule states that if the marriage lasted 10 years and the servicemember served in the military for at least 10 years during that time, the former spouse can receive a pension. These payments come directly from the Defense Finance and Accounting Service (DFAS) and not the servicemember, making the process easier. However, there is specific language that must be included in the divorce paperwork, so discuss this with your lawyer.

A former spouse is allowed to take out child support or alimony from the military spouse’s retired pay. However, a court order is required, and to be sent as a direct payment, it must pass the 10/10 rule.

The Survivor Benefits Plan is an annuity that a retiring servicemember can elect to ensure that their beneficiary receives a percentage of their retirement pay upon their servicemember’s death. SBP is a specific benefit that must be elected at the time of retirement from active duty or when receiving their 20-year letter as a reservist.

Many servicemembers decide not to sign up for this plan because they have no qualified beneficiaries. However, they might later get married or have a kid who qualifies for benefits. These are qualified life changes. If these happen, they have up to one year to add beneficiaries.

Keep in mind that there are many different nuances involved. Depending on whether it is a remarriage or not, the election process and coverage amount may change.

Military divorces can be highly complex. It is important that you understand your rights when it comes to your or your ex-spouse’s benefits. Even if you have been married less than 10 or 20 years, you could still receive significant benefits as an ex-spouse.

Have questions about military benefits? Broward County divorce attorney Scott J. Stadler can address your concerns and ensure you get what you are entitled to receive. Fill out the online form or call (954) 398-5712 to schedule a consultation with our office.