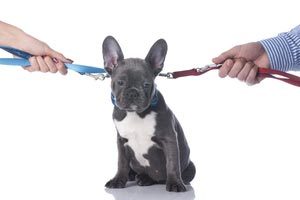 Many people have companion animals that play a very important role in their lives. Be it a dog, cat, iguana, horse, parakeet, ferret, or virtually any other legal animal, pets can play an extremely important role in a couple’s day-to-day life. This is especially true when a pet is jointly brought into a home by both spouses. Typically, a divorce treats animals as a form of personal property in every state. However, The Washington Post reports that recent amendments to divorce statutes in Alaska could be at the forefront of a movement that changes how pets are viewed during a divorce.

Florida Approach to Pets During Divorce

Florida, like most other states, views pets as personal property during the divorce process. That means that unless couples going through a divorce can amicably agree on who will keep a shared pet, a court will make the decision for them.

When determining who will keep a pet in divorce, many people are able to make decisions based less on pure emotional attachment and more on factors such as:

In other words, many individuals already come to pet custody decisions using many of the same factors that are used in determining a custody arrangement that is in a child’s best interest. While this certainly does not automatically place pets on a level playing field with children, it does demonstrate the significant emotional attachment people have with pets more so than something like a vase or a car.

When couples cannot agree on who should get custody of a pet, courts will determine the answer. They will take into account Florida’s laws related to equitable distribution of marital property and may factor in things such as who owned the pet before the divorce, who shouldered the majority of responsibility for care of the pet during the marriage, and even whether or not the pet can provide additional stability for any children involved in the divorce. As such, pets can sometimes be used as bargaining chips in hammering out a divorce settlement. A new approach to how pets are viewed during divorce may change that.

A new amendment to Alaska’s divorce statutes that took effect in January now allows Alaska’s courts to take “into consideration the well-being of the animal in determining who will get a family pet after a divorce.” The amendment even allows judges to assign joint custody of pets as part of a divorce settlement. Courts can also include pets in domestic violence protection orders and will require individuals that have their animals seized because of cruelty or neglect to cover the cost of sheltering the animal.

According to an animal law professor quoted in the article, this is the first time a court has the ability to look at an animal as more than just property and can take into consideration the animal’s well-being during and after a divorce. This serves as a reflection of changing social views on animals that have caused courts in states nationwide, including Florida, to begin struggling with the traditional approach of treating animals as property. Parties to a divorce have long viewed animals as more than property, hoping for specific custody decisions and even financial support for an animal as part of a divorce settlement, but courts have had little ability to be thorough in their approach to animals during a divorce given existing laws.

While Alaska’s new amendments are the first of their kind, they are significant in the field of animal law. Animal rights advocates have hailed the decision as “groundbreaking and unique,” according to the article. The traditional approach of treating animals as personal property does not always work, especially in situations where couples purchase an animal with shared finances. Being bought out of your share of a home or a car might be personal and complex, but ultimately it boils down to what is fair and acceptable as determined by a court. Rarely are people OK with being bought out of their share of a beloved family pet. Advocates of the law believe that it allows a court to focus on the relationship each individual has with an animal in question, which in turn can help individuals make more sound judgments about their own relationship with a pet. Supporters believe the law has the potential to allow people to step back and evaluate a situation surrounding an animal more objectively, which can help them use the same approach when it comes to other forms of property. Ultimately, this could help keep property disputes out of court and enable divorcing couples to create their own divorce terms instead of the court needing to step in to do so.

Legal Assistance with Pets and Property in a Florida Divorce

Currently, Florida still views pets as personal property, and there is no indication that this will change in the near future even though animal advocates are hopeful that Alaska’s example will catch on nationwide. However, that does not mean that pet owners need to view their animals simply as property. Many of the tools available in negotiating a divorce settlement in Florida can effectively tackle the question of who gets a Florida family pet after the divorce. For instance, mediation can be an effective tool at understanding your spouse’s point of view and ultimately arriving at a settlement that takes those things into account. If you have made the choice to pursue a Florida divorce, contact Scott J. Stadler to schedule a consultation and find out about the many options that exist which can help you achieve a fair and equitable Florida divorce settlement, including considering beloved family pets and other personal aspects unique to each individual going through a Florida divorce.